On Sunday the 14th of June, I facilitated a workshop with 9 members of the girls club, all sponsored children from various areas of the community, now studying in school. I enjoy facilitating workshops with a purpose and have had experience working with a number of different types of people and ages, however I had not worked away from England with my work. Adjusting my usual practice which I use with girls of a similar age in England, I devised a workshop which would be coherent and clear to all those involved, as obviously English is not their first language.

My main focus of the workshop was to have fun. I wanted this to be transparent at the start of the workshop, that I could create a space where those involved would be able to enjoy themselves without feeling like there are any strict guidelines to how they should behave in the workshop.  As well as this, my role here is not permanent, and my stay here only two w 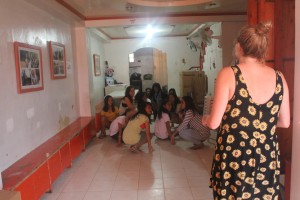 eeks, I made sure all my games would be well understood and recognized so even after I left, the girls would be able to continue playing them, making my work sustainable and long lasting. My second focus of the workshop was to create a comfortable environment in which the girls could flourish in confidence and become creative through simple exercises and devising. To do this I introduced the form of acting slowly and over time through a number of games. Using some truth games, which rely on facial expressions and body language to distinguish if a player is lying or not, we slowly began to focus on the players and discovering if they were telling the truth or not by these factors, thus introducing the element of acting. We then played a game which opened shared interests and common issues, introducing the Philippines as a common theme.

From here, I could stem a discussion about the Philippines and Typhoon Yolanda. Using emotions that appeared throughout the disaster, the girls devised freeze frames and scenes about the emotion described, but in a home or school environment, as well as creating a scene about their favorite thing about the Philippines. Among giggles and large beaming smiles, they performed in front of one another, thriving in confidence and enjoying the experience of acting, developing their performing skills in front of an audience. 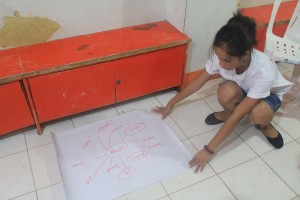 The workshop was jam packed, full of exercises and games over the two hours which was beneficial for their personal development through performing and confidence building, as well as fun, (well at least that’s what they told me!) Unfortunately I am not here in the following weeks, as I would love for the workshop to be a weekly activity, with different themes each week that would be effective in their growth into adults. However, I hope another volunteer whom has a passion for applied theater or facilitating workshops, will one day come to Tacloban and bring new games and fresh activities. But in the mean time, I hope these girls continue to play the games I taught them, and enjoy doing so. 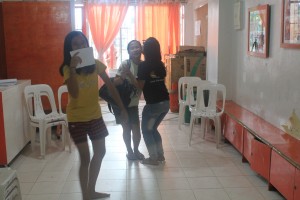