Let’s talk a little bit about Alejandro or Alex as we fondly call him. Let’s find out why he returned to Tacloban sooner. Alex came to Tacloban in October 2018 for a 2 week volunteer program in which he worked at a child care facility run by a religious organization. Less than a year later in July 2019, he came back  for a visit.  Due to his work schedule, Alex don’t have much time off, hence he could only spend two weeks volunteering. 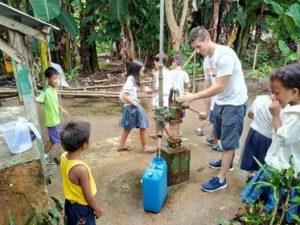 Out of all countries in Asia, why did Alex choose to volunteer in the Philippines? He had been traveling around South Asia for the past several years. Alex found out that each of these countries he visited has its own original culture and so he researched online for other countries in the region and found the Philippines. He soon realized he wanted to visit this country. Additionally, in London where he lives, there is a huge Filipino community. He met a few of them and heard about some amazing Filipino cultural traits. This further convinced him to go and see the Philippines. Some of the Filipinos he met in London moved back to the Philippines but the friendship remained, he still keeps in contact with some of them, and visits whenever he is in the country.

Out of many local organizations, Alex choose to volunteer with VFV. Why? He wanted it to be real. Alex wanted to make sure that he is working with a non government organization with real experiences, that knows the real problem in the community. He wanted to make sure the resources he put into the program reaches the recipients. He believed in the work that VFV does for the community, considering that the organization has been around for 15 years. Alex thought there was no better place to volunteer with than VFV.

What did Alex think about his program and placement? In the beginning he was skeptical about the child care program because he learned that working with children in child care facilities isn’t beneficial to children. That there is no way anyone can make a difference volunteering at a child care facility. When a volunteer leaves, the worst could happen. The kids would have increased vulnerability and a sense of abandonment. This is not ideal for young children in the long run. 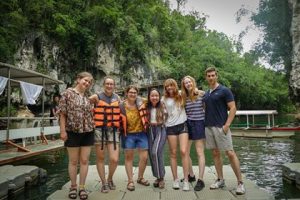 For Alex, the experience was totally different for him and the children. He met these bunch of children aged one to seven. He instantly formed a connection with them. Alex has a way with children resulting from years of experience. According to Alex, despite a less than normal childhood, these kids are a happy bunch. They love to laugh and are ready to give and receive love at the same time. Alex saw kids as young as five years old taking care of even younger siblings. Alex was grateful he was assigned to the child care facility. He felt it was the perfect place for him to work. More importantly, he did not leave these kids worse off than when he came first. Alex and the kids made a difference in each other’s lives.

Now let’s find out the answer to the question why Alex returned to Tacloban sooner. He said he met a group of amazing people from his placement, and his host family and VFV staff. Even after he went back to London, he continued correspondence with everyone. But what really triggered him was the news that something didn’t go well with the siblings from the child care facility. He felt responsible, that he needed to help and address the issue in person. For Alex, this development was the perfect excuse to return to the Philippines. He cancelled a trip that has already been organized in advance, changed plans, and flew to Tacloban instead.

The siblings from the child care facility that needed help were the same kids Alex recently sponsored and the reason for his return. He joined forces with Michele and Kiera in sponsoring the four siblings. Alex admitted it might be wrong, but these siblings were his favorite. He shared the reasons he loves these children.  He loves how these kids are loud and lively, and always smiling and happy.  Alex has seen how these children have a kind heart and willing to participate in every activity he organized. They would try to make other kids stop crying.  These kids would even help bring peace when other kids were fighting over a toy. 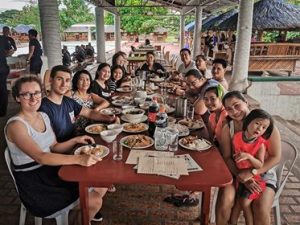 Would Alex volunteer again with VFV? A big yes! Until VFV kicks him out. Which will never happen. VFV always welcomes an extra hand and kind soul. Asked what project he would be interested to do if he volunteers again, he answered education or rehabilitation if he would have to choose. Otherwise, he is happy to help where he is most needed.

Alex shared lessons he learned from volunteering. He admitted learning to be more patient. Any change requires long chain of small events, and even longer in Filipino time.  Alex is now aware of Filipino time! He also learned the meaning of family, and how you can have more than one family. He urges anyone who doesn’t know, and would want to know, to check it out themselves. Alex learned to worry less for less things. He has seen how Filipinos are happy despite facing a lot of problems. He learned a little bit more about the Philippines, that it has plenty of wilderness, nature, and incredible spots that aren’t touristy. And of course, Alex is starting to learn the Filipino language. 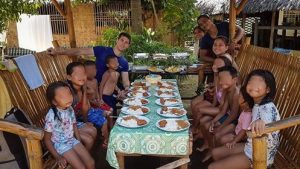 Alex’s love for his sponsored kids brought him back to Tacloban in a span of less than a year. And I think we could expect more visits from him in the future because he is invested in the lives of four young children he met at his work place in 2018. These children hold a special place in his heart and Alex wants to help them get a better chance in life because they deserve it.

To Alex, thank you for making a difference in the lives of four young souls!