Barangay Canggumbang in the rural town of Palo, Leyte has for a long time been an important area of focus for staff and volunteers at Volunteer for the Visayans. Over the years, the small rural barangay has been the recipient of a number of VFV Projects and Programs ranging from volunteer assistance at the local Elementary School to the distribution of school supplies through the Adopt-A-School Project and the provision of social welfare support to a number of children who are lucky enough to have been enrolled on VFV’s Child Sponsorship Program.

As a ‘far flung’ area, the children of Canggumbang are not as familiar with seeing foreigners as some of the other children on the Sponsorship Program are. However, for the last few months the children have seen more and more foreign volunteers entering the barangay as the VFV Build-A-Home Project expands to benefit the local community. 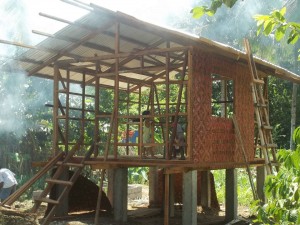 The barangay, which is extremely prone to flooding suffers almost every year as local rivers and streams overflow and flood into the neighbouring rice fields, causing both physical and economical devastation to a community which is already facing its fair share of socioeconomic issues.

In order to alleviate some of the damage caused to personal property during the rains, VFV has already assisted three families in the barangay through the construction of brand new houses which are raised by approximately four to five feet above the ground on sturdy concrete pillars. Through this innovation, the local families can seek refuge during floods and will be spared from the threat of damage to property.

Funding for the three Build-A-Home projects have originated from various sources; including private donations, donations from one of VFV’s international partner organisations and from funds siphoned through VFV’s unique social enterprising model. The houses, which are easily identifiable due to their bright fluorescent appearance cost between 80,000 to 100,000 PHP (approximately $2,000 USD) and will last the families for a number of years. In addition, the homes have also been provided with septics tanks and comfort rooms in order to improve local sanitation.

Project labor is obtained through the employment of local carpenters and paid labourers who are assisted by international volunteers, by providing additional support through the use of volunteers, the project is able to be completed quicker and reduces costs which allow for the purchase of higher quality materials. Whilst the houses are by no means anything like the houses from which our volunteers come from, volunteers leave satisfied upon witnessing the smiles of the family entering their new home for the first time.

As time goes on, VFV would like to address further houses in the community and is also considering the future development of a small community centre which can act as a daycare as well as an emergency relief shelter for other community members who fall victim to future floods.

VFV continues to be grateful for the kind and accommodating nature of the residents of barangay Canggumbang who make working the community so rewarding. If you’re an individual who is interested in funding a Build-A-Home Project, or you’d like to participate as a volunteer, please do not hesitate to contact us.