Emphasizing the importance of giving communities a ‘hands up’ rather than just a ‘hand out’ is paramount to the success of the community based initiatives that VFV operate and is a mentality that we constantly try to reinforce in each and every single project that we organize. 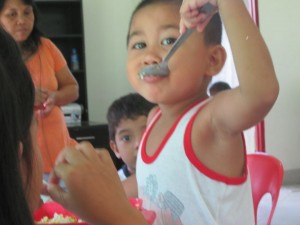 At the same time explaining the notions of sustainable development and long term plans to communities with severe and immediate socioeconomic issues can be a little challenging at times, which is why VFV believe it is so important to harness and maintain the full support of community leaders and officials whenever a new project starts up.

Recently, Volunteer for the Visayans has enjoyed an extremely positive and cooperative working relationship with the officials and local population of barangay Salvador, Tanauan Leyte, successfully running a supplementary feeding and nutritional awareness project in the community for a period of six months. The Project owes most of its success to the unified support offered by more than eight international volunteers participating on VFV’s Nutrition Public Health Project, Volunteer for the Visayans staff, local volunteers, numerous local mothers, barangay health workers, the barangay committee on health Maam Lorna De Paz and the barangay chairman Norman P. Salubon.

As the first stage of supplementary feeding reaches its climax, the question of what will happen next is a hot debate for the barangay and VFV. Whilst the supplementary stage of the project has enabled numerous improvements to be made regarding the health of preschool children and the education of local mothers it would be somewhat reckless for VFV to increase the duration of supplementary feeding and run the risk of the community becoming inevitably dependent on VFV.

With this in mind, VFV has envisioned a second phase to the project which will include the parents of enrolled children paying an extremely small yet realistic fee for each nutritious meal their child receives. This fee will account for no more than what is generally spent each day by parents on providing their children with what is locally referred to as ‘chichiriya’ (usually highly salted or sweet junk foods). The mentality behind this plan is that the community will begin to become more financially responsible for the project and that over a designated period of time the barangay will be able to transcend from the support of VFV so as to fund, organize and implement their own self-sustainable feeding programs (whilst naturally still under the regular supervision of VFV staff and volunteers).

This project, as with many other VFV projects only focuses on a single issue, attempting to empower communities by helping them to overcome one problem at a time. With this project, VFV hopes that decreasing the number of malnourished children in a community will help contribute in making children more focussed in school. More focused kids in school will hopefully result in better grades, better jobs and eventually should allow the community’s socioeconomic status to steadily improve.

Investing in future generations is incredibly important as the Philippines continues to face the adverse effects of poverty and overpopulation. We believe strongly in providing communities with the skills and knowledge to better themselves and aim to avoid being considered as merely a hand out service.  VFV offers communities the means to step up without replacing the traditional role of family and community. Through the support of our programs and projects we hope to walk hand in hand with local communities so that together we can strive to make a difference.

If you’re interested in contributing towards long term sustainable plans to improve the lives of communities in the developing world, then why not consider volunteering abroad in the Philippines with Volunteer for the Visayans.