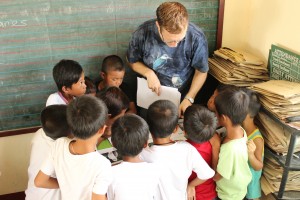 Joseph guides the students of Sto. Niño Elementary School in a group activity

Volunteers have many reasons for joining VFV’s powerful work improving the lives of disadvantaged Filipino communities.

For 33-year-old Joseph Taylor, his volunteer experience was also a journey of personal healing.

Joseph was holidaying in Leyte when Typhoon Yolanda struck last year. He was forced to wedge himself inside a hotel closet while the record-breaking storm destroyed the city around him.

“After the typhoon Tacloban was hell on earth,” said Joseph from London in the UK.

“There was no food, no electricity, dead people in the streets — it was just a war zone.” 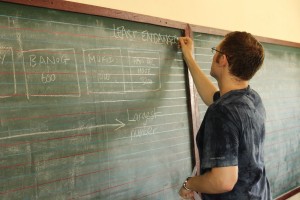 The generosity shown to him by locals during the crisis fuelled Joseph’s decision to return to the city as a volunteer.

“People helped me a great deal during Yolanda and I wanted to reciprocate that in some way,” said Joseph.

“I also wanted to come back to see the city in a different state; I didn’t want my last memory of Tacloban to be how it was when I left on November 10.

“I wanted some closure for myself too.”

“I got really interested in disaster risk reduction and adaptation to climate change,” said Joseph. 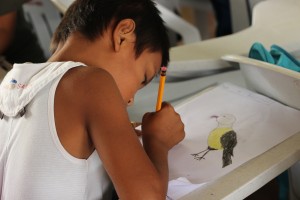 “Some of the skills I teach — like map drawing — will be very useful in a natural disaster because the children will be much more aware of their surroundings.”

Joseph has made a meaningful, positive impact on a community in need simply by sharing his knowledge on subjects he is passionate about.

“It has been a profound experience of gaining teaching skills in a community that has been affected by a calamity.”

“I walk away with the knowledge that I have positively influenced the education of the children in those schools.”

You can make a difference too! Click here to find out more about volunteering with VFV!