She has been sponsored so far for 8 eight years, since grade five. Karren is doing a Bachelor of Science in Mathematics. 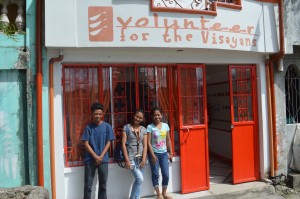 She will graduate in two years. She loves to play guitar and dance. Since her sponsoring,

the young woman keeps in touch with her sponsor. Every year, she communicates with him via letters or emails. She is really happy that she can have a relationship with him.

Karren said that Volunteer for the Visayans really changed her life, not only in a financial way, but also in a personal way. She now wears nicer clothes and feels better with herself. She now has a second floor in her house!. Because the financial and social burdens have been lifted, she has better relationships with her family. ”I am more confident” the schoolgirl declared.

Not only does Karren feels better, but also her family! With the help of her sponsor, the family is now able to save money and have less financial problems. They were all thrilled when Karren was sponsored, because they saw a future and a better life for her. The future looks good for the whole family now. Thanks to her sponsor, Karren can go to school, eat daily, and have a great life.

Karren was not the only one. There is also Roselyn, another sponsored child from Tacloban. She is seventeen years old. It also has been eight years that she has been sponsored. Before the sponsoring program, Roselyn had to help her family and her siblings, so she couldn’t go to school. Since elementary school, this young girl has been sponsored, and now she is studying for an Bachelor of Science in Environmental Sciences at Eastern Visayans State University in Tacloban.Roselyn is proud of her accomplishment, and she is grateful for everything.The sponsoring program helped her to become more mature and be able to enjoy the life.

Just like Karren and Roselyn, Alexis Avila, a twenty year old boy, is also benefiting from this program. He has been sponsored for almost ten years now. This sponsor also supports two other children. Alexis graduated with a Bachelor of Science in Information and Technology. He is a brilliant young man who was very integrated into his community, which gave him the opportunity to plant trees and plants after the Typhoon Yolanda (Haiyan). Like many other children, Alexis’s family was very poor, so he couldn’t afford to go to school. Since Alexis was sponsored, he was able to go to school and also attend university. His family are really happy and grateful for the sponsor.

The Child Sponsorship Program is an opportunity to support a child in the community to go to school, to improve their capacities, and to give them the chance to become more responsible and successful in the future. It also gives underprivileged and underserved children the possibility to grow and thrive in better conditions, just as Karren Gahumen, Roselyn Quirante, and Alexis Avila have.