For two of Volunteer for the Visayans’ college scholars under the Dumpsite Project, this year marks one of their biggest triumphs yet. Eva Ondez and Charlyn Ondez went up the stage last May 23, 2019 to receive their diploma as they graduated from College. Eva Ondez graduated with a degree in Bachelor of Elementary Education Major in Pre-School Education (BEEd-Preschool Education, while Charlyn Ondez graduated with a degree in Bachelor of Science in in Tourism, Hotel, and Restaurant Management (BSTHRM). The road to success for these two girls wasn’t easy, but they triumphed over all the obstacles and hindrances that came their way. 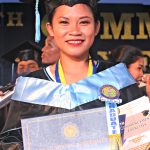 Eva Ondez has been sponsored under VFV’s Dumpsite Project since 2007, when she was still in third grade. Her mother raised them by doing odd jobs to earn income. Due to the presence of Tacloban Dumpsite at their village, Eva’s mother would scavenge recyclables and food that can be feed to hogs. Her mother raised hogs, chickens, and ducks to augment the family resources. 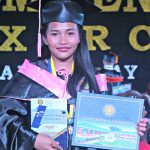 Charlyn Ondez has also been sponsored under VFV’s Dumpsite Project since year 2011. Her mother developed cataract, and as a result, eventually both eyes lost the capability to see. Charlyn’s father works at a junkshop, sorting different types of plastic.

Charlyn’s family also faced financial problems as she was growing up. To help her family, she would scavenge recyclables at the dumpsite. Since becoming sponsored in 2011, the financial burden of keeping her at school was lessened. Being as college scholar, Charlyn received financial support for her education.

The story of Eva and Charlyn is a story of success, of triumph. It’s about two persevering girls who worked for their dreams despite the odds.  It’s about kind souls who believed in them, who also dreamed a bright future for them, the unwavering support of their respective sponsors and the VFV staff. It’s about their families that despite the difficulties, gave moral and financial support to these girls.

However, the story doesn’t end here. A chapter closed, and another one just opened. Eva and Charlyn will now face the real world. Ready they might not be, but they have been equipped with the knowledge they earned upon years of education and living a life. No doubt, they will face many failures and disappointments, but surely there will be many successes too.

Congratulations Eva and Charlyn! The real world is looking forward to have you!

Learn more about our Dumpsite Project