It’s not how much we give but how much love we put into giving.
Mother Teresa

Super Typhoon Haiyan or locally known as Typhoon Yolanda, hit and devastated Tacloban City and many other parts of Eastern Visayas last November 8, 2013. Many came to our aid. Because of that,  we are forever indebted to everyone who helped one way or another. But we have yet to return the favor. Then we heard about the strong earthquake that struck parts of Mindanao during the last week of October 2019. We thought, finally our chance to help has come. It’s time to return the favor. To pay it forward, Yolanda survivors made a collaborative effort to collect donations for the Mindanao earthquake victims. Our turn to help! 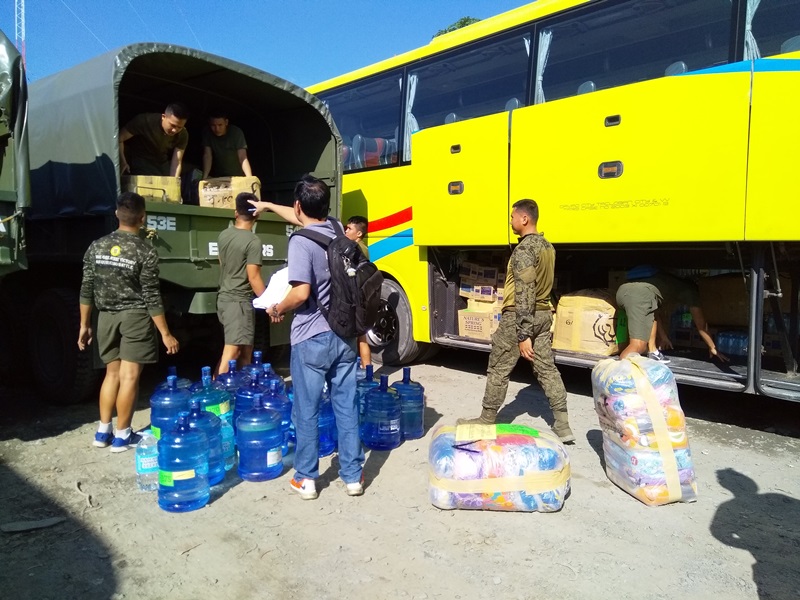 It all started with a private individual. She initiated the call to collect donations for Mindanao and coursed it through the Office of Tacloban City Vice Mayor. The office called on Taclobanons to donate water, food, medicines, hygiene kits, diapers, beddings, tarpaulins, clothing. Many answered the call, not just Taclobanons. In fact, people from all over Eastern Visayas responded. The office provided a building as central hub for the collection of donations.

Volunteer for the Visayans (VFV) responded to the call too. We have prior experiences with small scale relief operation, so during a meeting, the Office of Tacloban City Vice Mayor requested us to spearhead the collection and inventory of donations.  We agreed to the request and accepted donations from November 4-9, 2019.  AMORE visited the collection hub on the 5th day of collection. They mentioned that they collected food, water, and medicines. After some conversations, AMORE decided to bring these donations to the collection hub to add to the  goods to be sent to Mindanao. 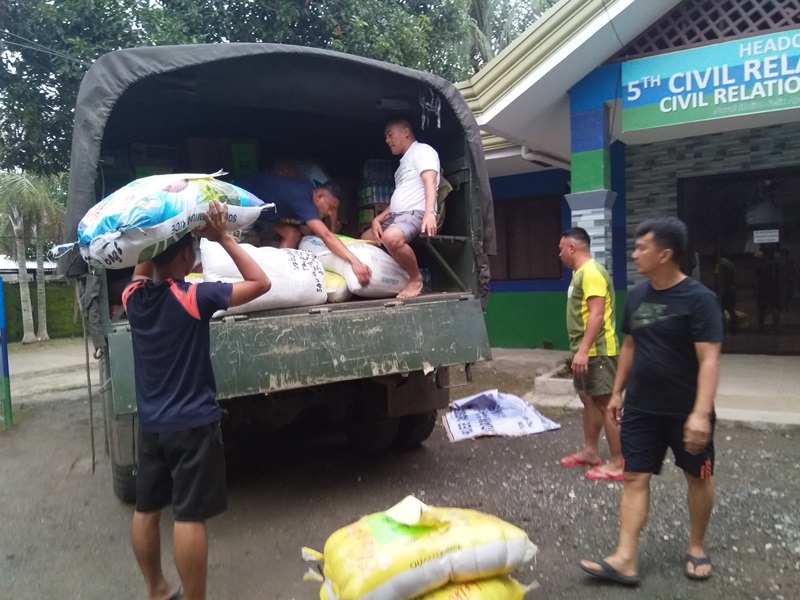 Individuals, business owners, institutions, and groups were kind enough to share their blessings. Because of them, Eastern Visayas was able to send donations to the earthquake victims in Mindanao. Individuals  from Tacloban City, and the provinces of Leyte, Eastern Samar, and Biliran donated various goods.  Business owners and institutions such from Tacloban and Leyte also gave their share. 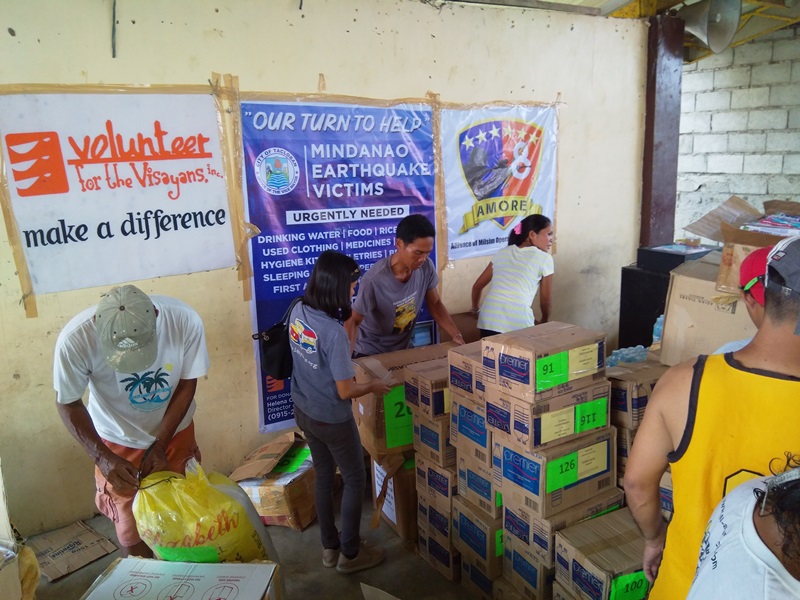 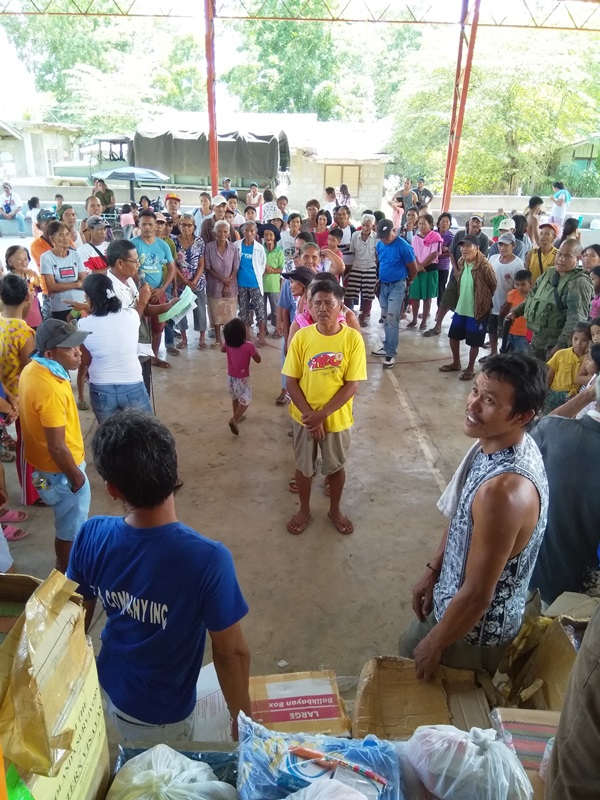 The residents of Brgy. Dalumay received food packs, water, hygiene kits, diapers, blankets, mosquito nets, mats, pillows, towels, and toothbrushes.  Over 300 families received food packs, bottled water, and mosquito nets. The indigenous people received additional hygiene kits. The senior citizens were given due priority. Each senior citizen received an additional food pack and a choice of any of the following: mat, blanket, pillow, or towel. Families with small children received the big jugs of filtered water. Those families who have not received tarpaulins on a prior relief distribution were given the tarpaulins we brought. 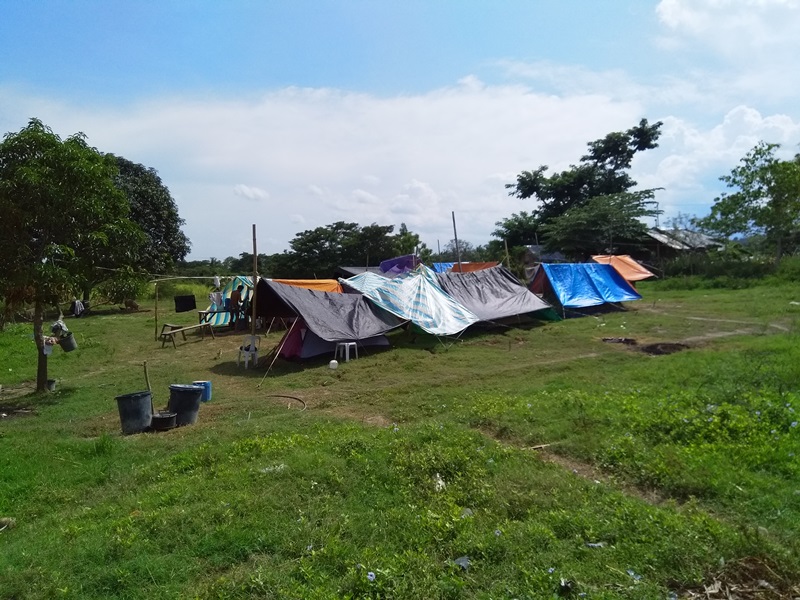 Tents set up by some residents of Brgy. Dalumay whose houses were destroyed during the earthquake.

The Armed Forces of the Philippines provided valuable support through the 546th Engineer Construction Battalion 53rd Engineer Brigade PA, and Eastern Mindanao Command. They transported the donations and provided security to our team of volunteers tasked to oversee the relief distribution.  Our utmost gratitude to the men and women of the 5th Civil Relations Group and 10th Infanty Division of Eastern Mindanao Command who made us feel safe during the actual relief operation in Magsaysay, Davao del Sur.

Kudos to everyone who made this mission a success!