I often consider it a great privilege to have worked alongside the local Filipino staff at Volunteer for the Visayans whom dayafter day use their strength, motivation, skill and compassion to assist those individuals, families and communities living in disadvantaged circumstances. The staff at VFV do this, not for fame or fortune but out of their desire and personal commitment to help those less fortunate. At times, the work of the local VFV staff often gets overlooked as the activities of a grassroots organisations like VFV only seem to attract the attention of those communities fortunate to be benefit from their services.

It therefore came as a great surprise and source of elevation for me when I learnt that the men and women from GMA’s Imbestigador had taken the opportunity to reach out VFV in order to assist them with the outreach to an eighty year old grandmother who is fondly referred to as Lola Cion. 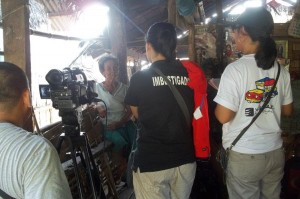 When GMA‘s Imbestigador called VFV, they were put in contact with VFV’s Community Program Coordinator Wimwim Canayong who used some of the resources in VFV’s inventory to provide relief goods to Lola Cion and to also learn more about the elderly woman’s situation.

For those of you who didn’t catch the show, or for those of our friends living abroad who have problems with the language translation: Lola Cion is an elderly woman and carer to her three grandchildren aged 5, 7 and 10 years old. Despite her age, Lola Cion undertakes an immense number of chores looking after her grandchildren; which involves her collecting firewood from a small forest to use and sell for pocket money and tending to a small piece of ‘borrowed’ land in order to grow root crops. What is made even more challenging is the fact that Lola Cion lives on an extremely small island off the coast of Leyte which is accessible only by pump boat.

Since then, VFV have had an influx of well-wishers and local benefactors from around the Philippines who have pledged support to Lola Cion and her grandchildren. VFV hopes to further assess Lola Cion’s situation and provide services to both her and her children which will insure the acquisition of mainstream education for Lola Cion’s grandchildren and help sustainably improve the situation of the whole family. After the show aired on GMA, the sheer influx of emails from people wishing to pledge support to Lola Cion was outstanding and still strikes me a true indicator to the great spirit of the Filipino people.

With more than 300 individuals connected to VFV’s various outreach projects including its well established Child Sponsorship Program and Dumpsite Project the sheer workload at times can often be overwhelming. As a result VFV staff are so thankful to their international and local volunteers who are always close at hand to provide that extra bit of support.

Reflecting on 2011, it was one heck of a year, more build-a-home projects than ever before, a number of successfully implemented supplementary feeding projects, more children rehabilitated from the grim horrors of working inside the Tacloban city garbage dump, not to mention a whole number of other great achievements. I only hope, that 2012 can match, if not better the success the organization had in 2011 and we can only do that with the continued support of our fantastic volunteers, sponsors and donors. At the same time, I want to give specific credit to the fantastic staff at VFV who do such wonderful things for disadvantaged communities all year round!