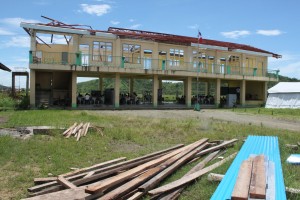 Builders at the site have almost completed erecting temporary classrooms where the school’s 117 pupils will be housed while reconstruction of the main building takes place.
The workmen say they hope to complete the temporary classrooms, which have been funded by UNICEF, within the next week.
Students will be taught in the makeshift classrooms for around two to three months while work takes place on the main school building to restore it to its former glory.
The cost of rebuilding the school is being paid for by the South Korean Government.
The roof was ripped off the building and the three classrooms on the first floor were gutted. The school hall which is located on the ground floor is where pupils have currently been taught.
Teacher Harold M. Chiquillo said: “This was once a beautiful building and it got destroyed (by the typhoon) in just four hours. We were beyond saddened. But still we are lucky to be alive.” 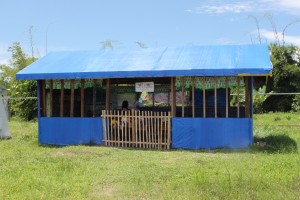 After Typhoon Yolanda the school could not operate for two months as it was used as an evacuation centre to house families whose homes were destroyed by the deadly storm.
Once the refurbished school is opened the temporary classrooms will be transformed into a canteen.