A little over a week ago Typhoon Hagupit (known locally as Ruby) bore down on the Eastern Samar province and proceeded to move achingly slowly westward across the country. 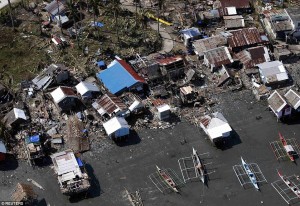 In their initial findings they discovered that, unsurprisingly, children are the most vulnerable in this situation. Lack of access to water, food, safe shelter, education, and healthcare services all play a role in this exposure. PECOJON also found that 30-50% of those surveyed said children are distraught and physically unable to attend school.

Their results also revealed that food, shelter, and income sources are among the top needs of the people surveyed across all provinces. Food stocks have been destroyed with about PHP 1.9 billion worth of destruction to agriculture. Due to the shortage of food, prices have risen while the inability to pay for food due to the lack of income sources takes a major toll. 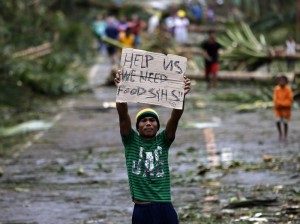 Damaged homes were cited as the second most pressing problem in Samar. PECOJON lists that materials to repair houses such as tarps, tents and ropes are some solutions to alleviate this need. Also there is a great demand for sleeping mats, cooking ware, clothing and footwear, blankets, and hygiene items.

As for the livelihood and income sources factor, problems are wide-ranging. There is a lack of employment opportunities as some found Typhoon Ruby has destroyed their means for income. For example in coastal towns such as Dolores and Santa Rita, in Eastern and Western Samar respectively, farming and fishing are major sources of livelihood. It has been reported that fishing equipment, including boats, have been lost or destroyed.  As mentioned before, huge amounts of agricultural fields have been ruined as well.

In response to the vast extent of need in various parts of Samar, Volunteer for the Visayans has focused relief efforts in barangay Can-avid in Eastern Samar. VFV director ­­­Helena Claire Canayong recognizes it is better to focus adequate coverage in one barangay at a time. In the after effects of Typhoon Haiyan last year, it was found that relief work was overlapping in some barangays, while others were left with no aid whatsoever. This time around she says better organization is in place, communicating with other organizations as to which barangays are being helped and which still need assistance.

The roads in Samar also suffered damages so planning transportation and routes to travel to remote areas of the province has been an obstacle. However during this week, VFV will deliver necessary items to Can-avid such as rice and hygiene kits.

There is still a tremendous need for basic goods and supplies all across Samar. If you are interested in joining relief efforts carried out by VFV, please consider donating. Click here to learn more about how you can help.

*written by Courtney Cunningham, media intern from the US