The anticipation for Typhoon Hagupit, or Ruby as it’s called in the Philippines, was almost as intense as the storm itself. After the extreme devastation of last year’s Super Typhoon Haiyan (Yolanda), warnings were heeded and precautions taken with urgency. 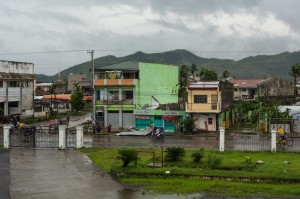 Ruby touched down Saturday night around 10pm in Eastern Samar province with forceful winds of up to 140km/h causing damage to houses, trees and, power lines. Due to heavy rain and storm surges, flooding has also been an issue throughout the typhoon’s path.

Tacloban City, however, breathed a sigh of relief Sunday morning when it’s residents awoke to little damage and only light flooding in some areas. Though roofs were torn off and power has been out for three days now, survivors of last year’s typhoon know how fortunate they are, especially because Typhoon Ruby caused no casualties in the area.

Volunteer for the Visayans has begun relief efforts in and around Tacloban City. Rice, hygiene kits, and other goods are being distributed to sponsored children and those affected most in the area. 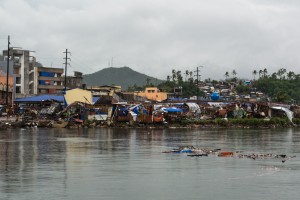 But because the island of Samar suffered the most damage, Volunteer for the Visayans has chosen to focus on relief efforts taking place there.  Still reeling from the destruction of Typhoon Yolanda, Samar is in great need of food supplies, water, and materials for rebuilding.

Reconstruction is not a one-man job, and thus requires the support of people from all over the world. If you’d like to donate to the rebuilding efforts in Samar please click here.

*written by Courtney Cunningham, media intern from the US