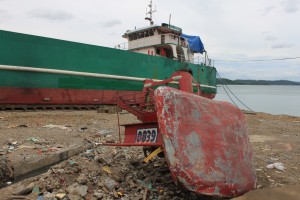 The LCT Rosman grounded ship is due to set sail again

Volunteers with VFV will often visit some of the sites around Tacloban badly hit by Typhoon Haiyan (Yolanda).

One of the popular places to visit is an area where huge vessels were washed ashore by Haiyan and have remained grounded since. The liners have now become part of communities as temporary accommodation has been built around the ships.

But now one of the vessels – LCT Rosman – is preparing to leave dry land and swing into operation again.

Captain Michael Flores said: “We have 12 men working on the ship preparing to launch it. I expect it to launch Saturday (today) or Sunday (tomorrow). It will then stay in the water here for a couple of weeks as we prepare permits to take it back to Manila.”

One of the workers, Robin, recalled the horror of discovering bodies underneath the ship when they lifted the 350 gross tonnage boat using hydraulic jacks. “We discovered 15 bodies. All ages. There were babies, teenagers, males and females and some older people. It was heartbreaking,” he said.

Volunteers take pictures of some of the ships and typhoon devastation

All those found under the ship had lived in the local area and the workers said it is very difficult as the marooned ship serves as a permanent reminder of the disaster to the local people.

Unlike some of the other stranded vessels, LCT Rosman did not suffer any structural or mechanical damage when it was washed ashore. This week workers at the site were putting the finishing touches to the aesthetics of the vessel and painting it.

Typhoon Haiyan struck on November 8, 2013, and is thought to have killed around 10,000 people. Many are still unaccounted for and thousands more were left homeless.

There is no sign of movement for the other ships in the area. All of them have watchmen on them to safeguard them from intruders. One of them sits next to aptly named by locals ‘Yolanda Village’ and helps to hold up a makeshift basketball net.

Some of them carry slogans from locals ‘we need food rice and water’ others have more light-hearted messages on them ‘for sale’ and ‘hope floats’ whilst some have heartfelt messages from volunteers and wellwishers from around the globe ‘to Yolanda victims, do not lose hope we will continue to help’. 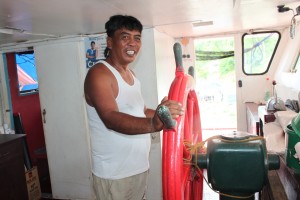 Are you interested in becoming a volunteer with VFV? Find out more here http://www.visayans.org/volunteer