Helena Claire A. Canayong , otherwise known as “Wim Wim”, is  the director of VFV and has been through every hurdle and every triumph that VFV has faced in the last ten years. She speaks to me honestly and openly in her cosy office, relaying to me how not only how has she personally handled certain situations, but also how VFV have responded to them. 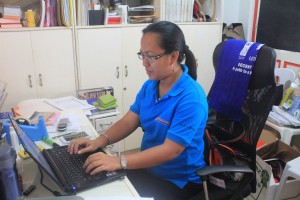 the community. VFV runs and sustains a number of projects scattered around Tacloban city and Helena is insistent when creating a project to make it sustainable because, “when you start something here, you have to finish it”, especially for instance, when you are in the hands of a child’s education, as the “hardest thing is giving hope and then removing it”.  Helena’s aims and objectives are illustrated and embedded in each and every employee in the company, “we teach people how to fish, not to be parasites,” as then children can become independent themselves, think for themselves and act for themselves. In this way, VFV works as a stepping stone, pushing a child in the right direction, “transcending values and rules” put in place by VFV to other areas of their life and training them to be future volunteers, helping out in all areas possible.

VFV acts as a beacon, a “definition of hope” to those that need it, and there are many that do. However, VFV have not always been this clear and transparent with their aims and objectives as Helena recounts that it “wasn’t always easy” before, as when the previous director was leading the organization, they had lacked the NGO experience which Helena gained working with a business consultancy. Despite being completely different NGO’s, Helena speaks of the positive influence this had on her work ethic, and on her administrative and organizational skills, which is a key aspect to running an organization, as a “good admin leads to a good foundation and makes the company systematically organized”.  The experience Helena had with the business consultancy NGO, had allowed her to gain the role of admin officer where Helena adjusted and constructed a new structure to format the company which has led to the success of VFV. As well as this role, Helena acquired the role of finance officer; center coordinator, community program coordinator, HR officer and finally, director in 2013. Working in every area of an organization has enabled Helena to learn each aspect of VFV and what it needs to flourish and thrive.

There has been much change from the start, from 2 workers and 1 local volunteer helping out, to 11 workers and countless volunteers, it has progressed the projects and allowed “the community programs to evolve over time”. With more hands on deck, it means VFV is able to reach more people with the work that they do, sponsoring now over 200 children from various projects and communities.  Despite reaching and supporting a number of members of the community, VFV still faces many difficulties and although Helena loves her work, “it’s a constant struggle”.  A constant struggle with clients- the children, the children’s parents, members of the community, volunteers themselves, finances and physical issues like transportation, but for now- “this is how we do things”.

VFV knows its limitations and resources, understanding the difficulties and learning from them and improving. Its focus is “based on capacity not ambitions of targets”.  And with this mindset, Helena looks to the future with optimism, to hopefully “strengthen what VFV have already established, before expanding through new projects”.  Another aim is for the international volunteers to not have to pay to volunteer, but just be an extra hand, as hopefully the organization will have reached the point to be able to financially support themselves and their projects.  As well as this, VFV hopes to “spread its wings” furthering sponsored children’s education and moving into their own space.

VFV’s dreams and ambitions are achievable and hopefully with the continuous support of their sponsors, they can reach them. In just 10 years, VFV has grown from nothing, to a network of beneficial NGO workers and members of community whom are forever thankful. Although facing daily hardships, a disastrous typhoon and a risky recession, VFV have pulled through with even more strength and endeavor than before. Let’s hope they will continue to grow and expand over the next ten years.