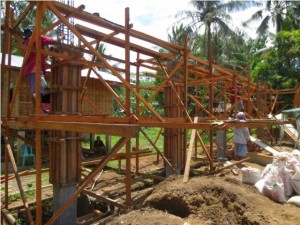 This March Volunteer for the Visayans began construction of the organization’s third community center, which is going to be located in a rural area of Palo, Leyte. Cangumbang is a village frequently affected by flooding that often submerges the small bamboo homes the majority of the community lives in. The community center in Cangumbang will also serve the community during times of flooding, by providing them with a safe place to escape the floods. The building will be constructed on pillars reaching over 3 meters above the ground. VFV will utilize the new center to provide much needed resources to the multiple sponsored children who live in the area, and help develop the community as a whole. The center will give VFV a place to conduct activities and provide feedings for the sponsored children.

The project in Cangumbang was formulated by a previous volunteer, Elsa Thomasma, who decided to fundraise for the center after seeing the need in the community while building homes there in 2011. By the end of 2012 the project became a reality when the estimated funds needed to build the center were finally collected. The new center was mostly funded by over 100 donors from Holy Angels Parish in Sturgis, Michigan, U.S.A., Elsa’s hometown church where she focused her fundraising. The church named the fundraiser, the Ark Project, reflecting the building’s ability to help the community survive the floods.

Elsa has come back to the Philippines, for the third time, to work as an Intern for VFV and help manage the project in Cangumbang. After three weeks of construction the center is progressing ahead of schedule, through the hard work of many local workers and the additional help of some international volunteers. The columns have been poured and the construction team is working on building the steel supports for the second floor. VFV projected completion date for the center is sometime in early May.