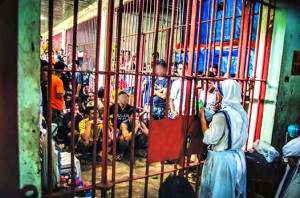 A nun from MOC asking the inmates

Missionaries of Charity in Tacloban City is a religious organization founded by Mother Teresa of Calcutta.  It helps the poor, sick, and needy.

It was founded in 1995 and has been helping out indigent families. The nuns go out into the communities to render humanitarian aid to different sectors of the society in need.

Missionaries of Charity  has a home for the sick elderly and undernourished and sickly children and is one of VFV’s placement for child care.

Missionaries of Charity (MOC) distributed food packs to at least 501 inmates of Leyte Provincial Jail. The nuns were assisted by two volunteers of Volunteer for the Visayans, Amy and Louis. The purpose of this activity was to celebrate Mother Teresa’s inauguration as a saint.

The nuns prepared the food in individual packages. Each pack contained rice, pancit, fried chicken and juice. Prior to food distribution, there was a holy mass service followed by games.

With the government’s campaign against illegal drugs and crimes, detention centers have become overcrowded. 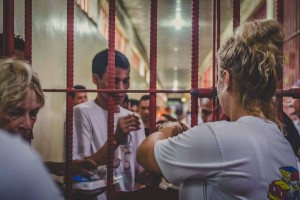 Amy handing out packed food for the inmates

The already limited resources has to be rationed to even more prisoners. Congestion in prison cells will ultimately will affect the overall welfare of the prisoners. There is a great risk for the spread of diseases among the inmates.

Such act of kindness shown by the nuns of Missionaries of Charity brings hope to the inmates.

The same act will hopefully enlighten them about the goodness in this world and help them for a better change to each individuals as they go through rehabilitation at the provincial jail.