Winston Rabbi, a Volunteer Program Coordinator for VFV, speaks to me about his experiences and time in “Boys Club”, a weekly club held every Sunday hosting a number of opportunities and activities, for all types of children. Winston at first, joined Boys Club so he could play and develop new games, but little did he realize that “time passed by and I had a group of people helping each other to become a better person”. Unnoticed by playing and gathering every week, Winston speaks of the honorable bond with those that attend Boys Club, illustrating that it isn’t “just about a group of boys who do activities every week”, but how each member molds and shapes one another to mature and develop into a better person.  It’s changed a lot since Winston’s time, now there is much more structure and “preparation”, meaning more members attend every week, and thus Boys Club has created a larger social network, benefiting all that attend.

Being a member of the Boys Club has really influenced Winston and the way he has lead his life. Apart from every Sunday being a “good experience”, the Boys Club gave Winston a focus in life, directing his ambitions and leading him to gain the credentials and status he deserved by achieving the position of Vice President of the community. This in turn, meant he gained the trust of the community by becoming a leader, learning the challenges and difficulties you face becoming one, but also growing in knowledge and experience. Winston sees parallels between his role now as a Volunteer Program Coordinator, and his role as a Vice President in the community, and Winston is grateful for the introduction of the Boys Club which laid the foundation of his learning to become who he is today.  Boys Club builds its members a better future, by shaping their members, inspiring them to become “a leader one day” or a scholar- “just like what happened to me”.

Similarly with the Girls Club, every week the club hosts members at the VFV center to come together and socialize with one another, playing games and having discussions. Recently, I facilitated a two hour workshop with the members of the Girls Club where I had created a safe space to spur creativity and their imagination through games and exercises. This finally led to members sharing pieces of theater with t 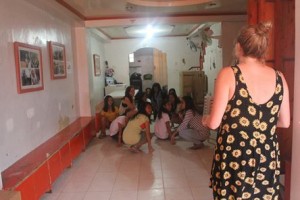 he other groups of members- creating an audience, which is an impressive and significant step in their personal development.  The outcome of the workshop given by the girls to me, was that the girls had fun and had flourished in self confidence. This highlights that the Girls Club is helpful with each members individual growth into maturity and emphasizes how Girls Club has a positive influence on the girls and their future, providing a stepping stone for their progress and a safe space for them to confer and share thoughts, opinions, dreams and ambitions in a safe and comfortable environment.