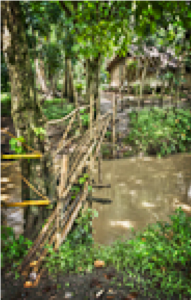 Elsa Thomasma from Michigan, USA, fell in love with the village of Cangumbang during her visit to the Philippines in 2009 when she had a volunteer assignment there. Back then the area when the hall now stands, was an open grassy area. Part of Elsa’s project was to plant some of the land as a small vegetable garden to help the local farming community feed itself. Unfortunately the soil was not good for growing due to large amounts of garbage just under surface. The land is close to a river and after flooding it was prone to the river depositing much of the rubbish there as the waters subsided.

In 2011 Elsa returned to Tacloban for a 6 month stay. On this

visit she had a 3 month posting to the village on the house building project. During that time she helped build 3 houses. The houses all followed a basic plan of wooden construction and were built at a height of 5 feet above the ground to allow for flooding. Later in the year Cangumbang experienced their worst flood on record and the 5’ platform was found to not be high enough. All new houses will now be built at a height of 6’6” above the ground. The restroom or CR (comfort room) as it is known in Philippines was added later to the design and are built as a separate building behind the huts.

The next plan for the village was to build a community hall that would be a refuge in the case of major flooding and also serve as a project room and venue for the nutritional programme. There was one major stumbling point – Money! The initial plans for the hall came to a cost of $20,000. Money the VFV organization and the community did not have available. On Elsa’s return to the US she began the task of fund raising mainly through her local church. During the next 18 months $22,000 was raised for the village through one off donations and collections. The VFV kicked off the project in February 2013 with Elsa returning for 3 months to be project manager. 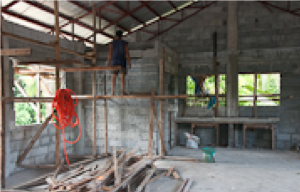 The early stages of the project took far longer to work through than expected. Planning consent, land purchase and small changes to the plans all delayed the project. The main change to the plans included moving the steps to the side of the building for easier access in the event of a flood and making the floor concrete instead of wood.

Throughout February to May Elsa’s time was spent totally on the project, dealing with government offices, adjacent landowners, planning resources, buying supplies and coordinating with builders. Keeping track of the budget and contacting donors both personally and writing a daily blog. The tasks were a full time job and kept her extremely busy.

Progress on the hall was steady and progressing well. Then the big day came when the floor was laid. This had to be completed in one go to ensure it was structurally sound.

At 7am work started with the small team of regular workers backed up by nearly 40 student “Volunteers” from the VFV Boys Club. Their job was mainly to mix and carry the cement to the floor space. When the normal workday ended, the students went home and were replaced by farmers after finishing there day in the fields. The chief builder, carpenter and Elsa remained on site for the entire time. The final bucket of cement was poured at 1am. The floor was then left to set. 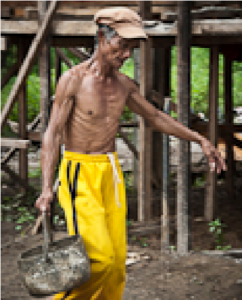 Then in April the money ran out. The change in floor design had come at a big cost and again the project faced delays due to lack of funds. Elsa contributed much of her own money to keep the project running before returning home to have another burst of fundraising. Another $7000 was raised, enough to complete the building.

During her time back in States Elsa continued to receive work in progress updates from VFV and she continued to update the blog. www.travelpod.com/members/elsat

The Philippines is now a second home to Elsa and in July she again returned to continue assisting with the project as well as taking on new projects. Work has slowed a little while Elsa has been away due to workers being pulled onto different projects but she is happy that the major structure is sufficiently complete that in the event of a major flood this rainy season the building can be used as temporary accommodation for the villagers. The CR’s and the kitchen area still need to be completed along with the finishing touches to the walls. At least it is useable if required. 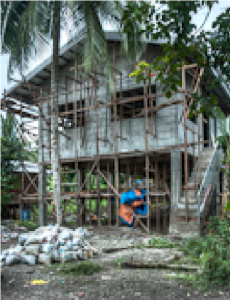 I asked Elsa if she had any other plans for Development of the community of Cangumbang? Sure she said “A sustainable project like nutritional aid, hygiene classes and craft classes for adults so they can possibly earn some money. Cooking and nutrition education, then maybe I will think of some other things. One idea I would like to do is to have activities for children on Saturdays, like a Saturday club, so parents can get away for personal time. I think First Aid is essential and that will probably be the first thing I will work on. They have never had access to anything like that. We will need to buy a first aid kit for the centre and train some people to be able to administer basic treatment”.

There is no doubt Elsa loves Cangumbang and the people who live there. This surely is her second home and a legacy to be proud of.

Cliff Threadgold is a professional photographer who volunteered with Volunteer for the Visayans.  He has written the article and photographed several of VFV’s projects and activities.