In the early hours of December 6, 2014 , communities in the provinces of Leyte and Samar were met with the forces of Typhoon Hagupit (known locally as Ruby). The typhoon carried winds gusting at 140 km/h and left more than 17 inches of rain in the Eastern Samar province, the area which was devastated most.

Over 1 million people were evacuated from areas threatened by the typhoon, especially along coastlines. Ruby also caused at least 20 casualties and left over 13,000 homes destroyed in Samar alone. 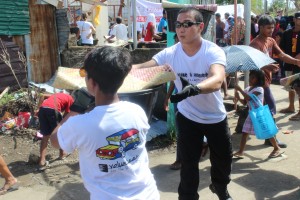 In the wake of the storm, thousands of families have become displaced and without basic necessities. Many of these communities are still reeling from the devastation caused by Typhoon Haiyan (Yolanda) last year.

For Volunteer for the Visayans part, we’ve always tried to maintain some resources to be ready in the wake of any natural disaster. In 2009 we helped with logistics in sending local aid to Manila for Typhoon Ondoy, and in 2013 we supplied aid to people all across Tacloban City in the aftermath of Typhoon Yolanda.

Today we are focusing relief work in our neighboring island of Samar. Typhoon Ruby touched down with brute force, leaving the most damage to this eastern most island in the Visayas. We can continue to operate in distributing relief on a grassroots level; whether this be providing rice and non-perishables to remote communities, as well as clothing items and basic necessities such as cooking equipment and sleeping material.

How You Can Help

We’re always in need for material donations such as outgrown clothing, toiletries (toothpaste, soaps etc.), medicines (pain revilers, cough and cold medicine, antibiotics etc) and vitamins to assist in the event of a natural or man-made disaster. Donations are also greatly needed to provide basic necessities to devastated communities in Samar.