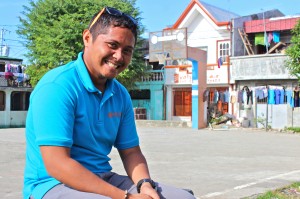 Winston Rabi believes a long relationship with VFV has helped shape him into the community leader he is today.

When VFV opened its doors in Bliss in 2005, Winston was one of the original Boys Club members. Boys Club is a community project aimed at steering local boys away from drugs, crime and gang warfare with weekly activities that encourage leadership and responsibility.

Winston quickly became President of the Boys Club and, under his direction; the club became a platform for fostering community connectedness amongst the male youths.

“I saw that there were smaller groups of males in the community that would quarrel and fight,” explained Winston.

“I told them that we are one group, one community together and we must not fight amongst ourselves.

“I have organised things like the basketball league to keep them active and to keep them connected with each other in a positive way.”

In 2008 Winston became Vice President of his neighborhood and relished his role as leader for the community’s youth.

“It was my job to keep them engaged in activities that are good for the community,” he said.

“At first I thought these are big responsibilities but then I thought if people trust me with this I will do my best to do my jobs well.”

Recognizing Winston’s potential, VFV Director Helena Claire Canayong nominated him for VFV’s Sponsor A Scholar program — which teams up disadvantaged youths with foreign sponsors for the duration of their college diploma. 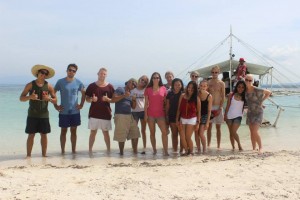 Winston, fourth from left, takes a group of volunteers to Canigao Island

Winston completed a Bachelor’s Degree in Electrical Engineering from the Eastern Visayas State University. Before he went on to graduate with Masters in 2013, Winston had already landed a job with VFV!

The 27-year-old is one of VFV’s Volunteer Program Coordinators — responsible for volunteer airport transfers, volunteer support and excursions and assisting in researching new projects and placements in need of volunteers. And he has taken to his role with the same passion he applies to all aspects of life.

“The thing I like best about my job is experiencing different cultures and different languages,” he said.

“It’s great to interact with people from all over the world, to learn about their cultures and use that knowledge to be of better service to the next group of people that come through.

“If the volunteers enjoy their experience with us it is very rewarding for me.”

More than anything Winston enjoys his role in VFV’s work empowering local communities to build themselves a better future.

“This community has helped build me into the person I am today so it feels good to give back.”

Would you like to give promising youths, like Winston, the chance to go to college? Click here to find out more about VFV’s Sponsor A Scholar Project!