On December 27, 2013 VFV staff and volunteers departed for the island community of barangay Planza, located in the Muncipality of Babatngon, a short forty-five minute ride outside of Tacloban City.

Although Planza is not a community that suffered widespread structural damage or loss of life during the storm itself, it is still a barangay in need as the taxing of local resources in Tacloban leaves the community with a real shortage of basic necessities. 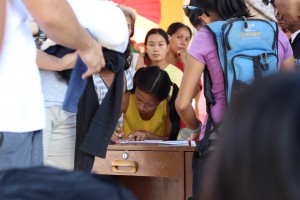 The community is probably best known as being the home of Lola Cion, the grandmother who was featured alongside VFV Director Wimwim Canayong during the GMA Network show “Imbestigador”. Since then, VFV have enrolled one of Lola Cion’s grandchildren onto it’s Child Sponsorship Program and have made repeat trips back and forth before and after typhoon Yolanda.

The recent trip to Planza was VFV’s first gesture in laying more solid foundations in the community to help one of the most remote barangays in the local area. The goods delivered included rice, clothing and sanitation items. 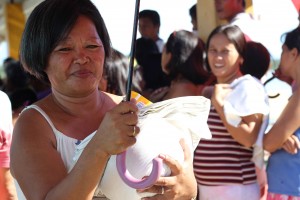 Aside from delivering relief goods, VFV Coordinators Ester and Leda also orientated the local community on the correct use of a donated Sawyer water filtration system whilst some of the international volunteers kept the local child population entertained with a few funny faces.

The items delivered will provide a short period of relief for the local families, many of whom survive on meager incomes of less than a hundred pesos a day.

Prior to Yolanda, Volunteer for the Visayans had some ambitious plans for Planza, but like with so many things, many of these plans have been put back to the drawing board in order to concentrate on the rehabilitation of communities directly affected by the storm. Either way, VFV’s innate ability to knit themselves into the local community will be more and more crucial as they endeavor the continuing relief efforts.