For the second year in a row, VFV has sent some of the teens from the Dumpsite Project to a youth camp in the town of Dulag. Going to the camp, which is run by the United Church of Christ in the Philippines, is a way to reward high school graduates as well as those who keep their grades high enough. I tagged along last Friday with ate Wimwim, the director of VFV, to see what they were involved in. 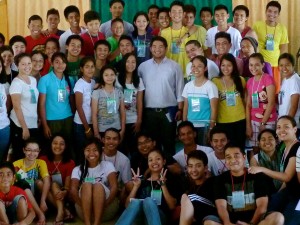 Throughout the four days, the camp offers discussions, activities, and games. One night is dedicated to a banquet night and talent show, for which everyone is divided into small groups to create a performance for the others. This year’s groups chose different forms of dance, theater, and singing.

The camp is more than a chance for the Dumpsite Project kids to do something that other teens get to do; it also teaches them skills they can use when they enter the world beyond their home community. I sat down with ate Wimwim and asked her what benefits the kids get from the camp. She explained that it gives them a chance to leave their small, insular community – exposing them to a different environment is important training for their adult lives. “They get practice taking instructions, being patient, adapting to a schedule and communicating with a variety of people. When they come back, I see changes in their behavior even after four days. They’re more polite and sensitive to others. They think much more about other people.”

The youth camp, which is attended by kids of all economic levels, is also an equalizer. Some of the kids in the dumpsite program start out intimidated by others who have more money than they do, but in this environment everyone has the same duties and responsibilities. Everyone does chores, like serving food and cleaning up, and everyone participates in the same activities. In discussions, all ideas are equally important – regardless of how much money the person has or what school they go to. This is good practice for life after graduation, when they will need to work with a variety of people.

“It’s important for them to see some different perspectives,” ate Wimwim told me. “They meet a lot of people from different backgrounds. It can be inspiring for them to meet people whose families worked their way up – this shows them that if they can succeed if they stay in school and work hard.”

Participants also enjoy having some time to themselves – especially those with problems at home. One girl said this was the only weekend all year she had time on her own, and that some distance had helped her.

Several days after the camp ended, I was shadowing one of the volunteers on a morning of interviews with some of the Dumpsite Project kids. One question on the list was “What was the most unforgettable moment of your life?” Everyone who had attended answered: “Camping in Dulag!”