The girls were thrilled to be in front of the audience gathered downstairs in the VFV community center.  Smiling and glancing around excitedly, they prepared to start performing in what was, for most of them, their first play.

They called it Kilig, and they began by explaining the name – a uniquely Filipino word referring to the fluttery feeling of joy or excitement often brought on by romance. 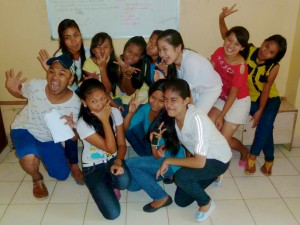 Mig with his young actresses

From there, they acted out a series of short scenes about kilig, from a brush with a movie star to making new friends at school.  From their presence and confidence onstage, you never would have known that this experience was new to them – and you also wouldn’t have guessed they had such a limited time to create it.

Mig Macario, an actor who has worked on over 40 TV and film projects (including Bashful on ABC’s Once Upon A Time), had two weeks to volunteer with a group of VFV’s sponsored girls.  These girls, who come from disadvantaged families, are sponsored by individual donors from around the world; this gives them financial assistance with school, nutritious meals and the opportunity to get involved in VFV community programs.  Because he was born in the Philippines, Mig was especially interested in volunteering with young Filipinos.  “I wanted to hear their stories in a way that was creative and active,” he told me.  “I also wanted to teach them some life skills they could use when the two weeks was over.”

To do this, he decided to hold a two-week playbuilding workshop in which the girls would create their own play from start to finish.  Playbuilding is a theater and education process that uses acting as a way to teach skills such as self-esteem, teamwork and discipline.  Participants create every aspect of the play, from the dialogue to the set.

Mig knew that if the play was going to translate to the girls’ daily lives, it would have to stay in touch with what they knew.

So how do you know what’s relevant to 13-16 year old Filipina girls?

A brainstorming session revealed that the group had a passion for pop culture.  “A recurrent theme was Filipino soap operas, music and celebrities,” Mig said.  “They also brought up the usual issues teenage girls face everywhere – things like crushes, self-confidence, popularity, and boyfriends.”  From this, the group decided to make the play about what makes them kilig.

Mig called himself the co-creator.  “I shaped the play.  I nudged it along.  If some aspect wasn’t working, I’d encourage them to think about it in a new way.  But all the ideas came from the girls.”

Working on the play three to five hours each day for two weeks boosted not only the girls’ acting skills but their self-confidence and discipline.  They had to show up on time, put effort into rehearsals, act in the moment and laugh at their mistakes.  They also had a broader sense of possibility by the end, said Mig.

“Most of these girls had never acted before, and before we started, many of the girls thought it was out of their reach – some of them assumed they weren’t rich, pretty, tall, or fair-skinned enough to act.  I tried to help them see that the opportunities are for those who put in the effort.”

Also relatively new to the girls was a more creative thinking process that isn’t widely emphasized in the Philippines.

“Acting, singing, and performing here is often about perfecting something that already exists.  Singing videoke to well-known songs, painting by the numbers.  With this, I wanted them to practice creating something entirely new.”

The girls had to think outside the box to create the whole play, meaning that they acted not only as the female characters but also the male characters and the set pieces.  At first the girls were giggly about the idea of playing male characters too, but the idea that they already had what it took to get the story across to the audience sunk in quickly; that constraints can be opportunities for creativity rather than roadblocks.

I asked Mig what the most satisfying part of the volunteer experience was, and he told me that it was great to see their personal victories.  “You could see that they felt good about their accomplishments.  We worked together to create something that they were really happy with.”