Last December 2011, VFV proudly launched a brand new, purpose-built community centre in Barangay Sto. Nino. Built by volunteers and locals, with the help of GoAbroad Foundation and Causes, this new building was six months in the making, and when finished, was intended to serve as the hub of the local community.

The building is currently at the centre of several VFV projects, including a Nutrition Project in which Racha Yehia volunteers with. I caught up with her at the community centre to see the impact of her work. 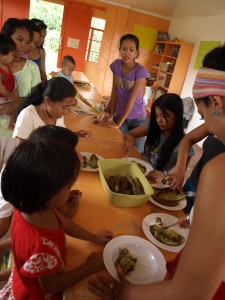 Today, the local elementary school is hosting its annual intra-mural day, a day-long sports event, and the entire village is taken over by jumping children preparing for such local sports as walking on home-made ‘coconut-shell’ stilts.They begin with a banner-bearing parade through the village, and conclude with a series of enthusiastically choreographed dances for each grade. Having been already working here every day for over a month, Racha is familiar with all the children. Everywhere she goes, cries of ‘Ate! Ate!’ (Filipino for ‘sister’) follow her and she is flocked by waving little hands asking to be picked up and played with.

Racha works as a nutritionist back in her native Canada, and is currently working at the nutrition project here in Sto. Nino. Working for VFV is in fact tailored perfectly to her career aspirations. “I’m really interested in building my C.V. so that I have more experience working in developing countries. That’s what I want to focus on in future, working abroad and informing governments on nutrition policies, so this is really perfect”. As well as providing an impressive amount of hands-on experience, her VFV project is flexible enough to be tailored to her own ideas and strategies for encouraging healthy eating.

The main aims of the projects are twofold; providing a balanced, free meal each day for the children, whilst educating the local mothers on healthy eating. “It can be frustrating” notes Racha of the latter. “Such ingrained habits as food and diet don’t just change over night – it really is a case of repeating the information over and over, persisting with your message, until hopefully people will be inspired to start making long-term changes to their daily diets”.

But attempting such changes without building up trust and good relationships with the mothers would be pointless. “It’s great having the centre here. As well as having all the cooking facilities we need, it’s a useful hub, where the mothers bring their children every day, and many of them arrive early to help me with the food preparation”. Indeed, when I’m there, Racha is surrounded by local women keen to offer their advice on her particular recipe, and suspiciously accepting her insistence that eggplant can be served with its skin on. “In fact, each week, we invite two of the mothers to lead the cooking themselves – we fund them for the ingredients, providing that it’s healthy and balanced. Anything which encourage them to get more involved, more interested, means that our message is much more likely to stick”.

Racha has to create a different recipe almost every day, which can quickly become a challenge when you have to feed thirty children with 500 pesos. As a nutritionist, she knows exactly what constitutes a balanced meal, but re-creating them here involves using only the local ingredients which the mothers can recreate. Secondly, her food has to pass the rigorous test of appealing to the notoriously unadventurous taste-buds of under-fives.

“I tried making stuffed eggplant once, as it was a recipe which they hadn’t really heard of here before and seemed like a great way to encourage them to eat more vegetables. At first, everyone was really interested and it seemed like it was going to be a success, but when it came to serving – the kids just opening up the eggplants, ate all the rice and stuffing inside and left the vegetables untouched!”

Despite having been open less than a year, the new volunteer centre is already really making a difference. As well as daily feedings, the new volunteer centre is also hosting a home-tended vegetable patch and providing a base for the nearby dumpsite project. Its an accessible place, open to all, filled with a plethora of toys ensures that the young kids enjoy coming here and learning. Small-scale, localized, completely community-orientated, this is shaping up to be exactly the sort of charity investment which really makes a difference.

Kamila Kocialkowska, latest Media Intern for Volunteer for the Visayans writes about the experiences of fellow volunteers working in various VFV projects. In this article, Kamila talks about Racha Yehia, a nutritionist from Canada who has recently volunteered at the Sto. Niño Nutrition Program, Tacloban City, Philippines.