On the 13th of June, myself and a few other volunteers jumped aboard our rented Jeepney and explored the various project sites which VFV have in place, as well as a few tourist sights in Tacloban. We started our day with a trip to the Tacloban Cemetery, visiting the mass grave where hundreds of white crosses stand erect donned with names of the victims that perished in the Typhoon. Seeing each neat row of crosses, each individual one representing a life; a brother, a sister, a father, a mother, an uncle, an auntie, a grandmother or grandfather, a friend or a lover, touched us all. What made it even more haunting was the beautiful landscape that surrounded the cemetery and the warm sun that shone on our backs, it didn’t feel right, it wasn’t justice. 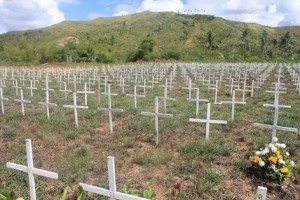 We then moved on to the Dumpsite. Towers of strewn plastic and mountains of dirt were all the eye could see and the pungent odor of the waste quickly attacked our nostrils. The sight was ghastly, but what made it harder was seeing the groups of families and young children collecting plastic. Standing around wearing Dr.Dre headphones, one would think this child is like any other child, until you see they are broken with no wire, he is pant less and shoeless, wandering with ease through waste to earn a living. It broke my heart. I couldn’t photograph these people’s lives, their jobs and their accustomed environment. No child should be put through such a hardship in which these children faced, not being able to act and play like a child. I immediately resolved to sponsor a child through this project once I am home and gaining a sufficient income, as life for these children is unforgettable.

I was happy to see that my program fee was benefiting such a useful and significant project like the Dumpsite project, and throughout the day we continued to visit even more, moving on to Sto. Nino Construction area, where we saw a school was being built. Construction had started in late March and it was due to be completed in late July. Sandrine, another media intern, commented on how quickly it had changed and expanded from her visit just a few days ago. After waving goodbye to the builders we moved on to the Sto. Nino Community Center, where on the weekends, the sponsored children from the Dumpsite project are fed and get to socialize with other sponsored children their age, away from the stress of school and away from the Dumpsite. We also went to visit the Cangumbang Center, another project many of the volunteers fund through their program fee. This is titled the Nutrition Project, and here one of the volunteers through VFV cooks, feeds and plays with 30 sponsored children from the province of Cangumbang every day. The center is clean and spacious and we were told it was funded by an American lady through her family, friends and her church. It emphasized to us volunteers, that with just a little amount of persuasion and perseverance, donations can come thick and strong from wherever in the world, which can really create something significant and important to the community here in Tacloban. 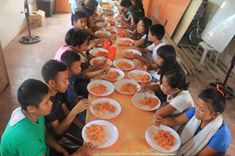 From here we began our tourist tour, heading to San Juanico Bridge, the longest bridge in the Philippines, where we dodged traffic for funny pictures to show our friends and family at home. Next we moved on to the Mac Arthur Memorial where Mac Arthur returned to the Philippines liberating the country from Japanese occupation. Here, the bronze statues highlight the strength in promise Mac Arthur made to the people of the Philippines, acting as a symbol of generosity and alliance in all the years to come.

Our last stop was the Sto. Nino Shrine and Heritage Museum, where we were shocked and surprised by the splendor and extravagance of the Sto. Nino Mansion. Walking past rooms and luxurious items such as the Ming Dynasty pottery collection, grand pianos from Vienna and Egyptian mirrors garnished in gold, not only we were taken aback by the sheer size of the place, but also with the items which they so easily splurged on with members of the public’s money. It made me feel awkward but also amazed. When passing the comments book, all I could muster to write was “ridiculous”.

The day was a long and tiring one, but insightful to learn of Tacloban’s history and culture. As well as this, it was great to be given the chance to see other projects run by the VFV that I am unable to see, acknowledging the effectiveness and impact VFV has on the community of Tacloban and it’s surrounding areas. 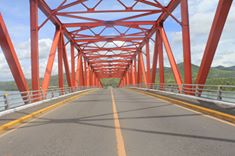