On December 17 2013, 40 days after Typhoon Yolanda (Haiyan) caused widespread destruction across the region, Volunteer for the Visayans (VFV) engaged in it’s most ambitious feat of relief work since the beginning of the crisis.

Through co-ordination and partnership with Muslim Charity, a cross-faith U.K. based non-profit,  VFV were able to distribute 285 kits of relief to families living in rural communities in Palo and Tanauan, Leyte. Being among VFV’s Board of Trustees and after spending two and a half years with the organization, they asked me to come along for the ride. 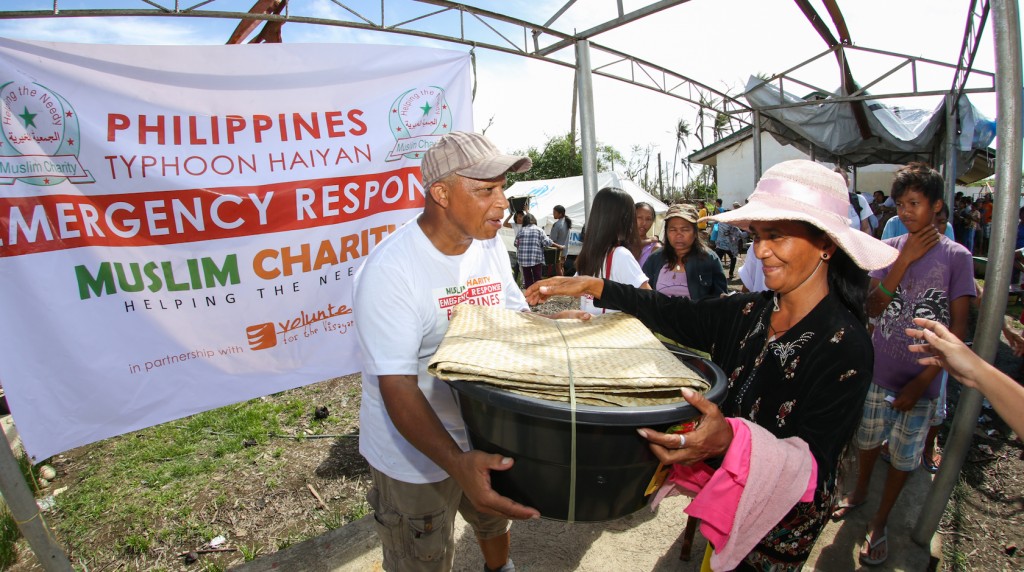 Our journey began at the relief center headquarters, located at the GoAbroad Asia complex in the V&G subdivision of Tacloban City. There a consortium of local volunteers, international volunteers and VFV staff began loading up vehicles with basic relief items that had been purchased with the aim of easing some of the day-to-day challenges that still face many Filipino families. Goods included mosquito nets, bedding and cooking equipment; items that whilst basic in nature were all but washed away by the strong storm surges and floods that swept through barangays a month earlier.

From there, we saddled up in a convoy of three vehicles and made our way to one of the refugee centers in Tanauan, Leyte where the families of our children living in San Roque Tanauan were currently being billeted. There is very little remaining in barangay San Roque and the challenges facing this community are incredibly tough. Almost all standing structures were washed away by the storm surge and many families are with little or no-livelihood. As a former coastal community, most of the livelihood came through fishing and being so far away from the shoreline and having no resources to rebuild their boats is a real barrier for the families of San Roque to overcome. Living in a refugee camp also has it’s limitations as access to basic provisions remain short whilst the risk of sickness and disease are constantly lurking. Whilst I’d heard a few scare stories of events in refugee centers, I encountered no problem myself as I walked around, exchanging in friendly conversation with a local populace who had all but lost everything, apart from the smiles on their faces and looks of surprise when hearing Waray Waray blurt from the mouth of a caucasian. 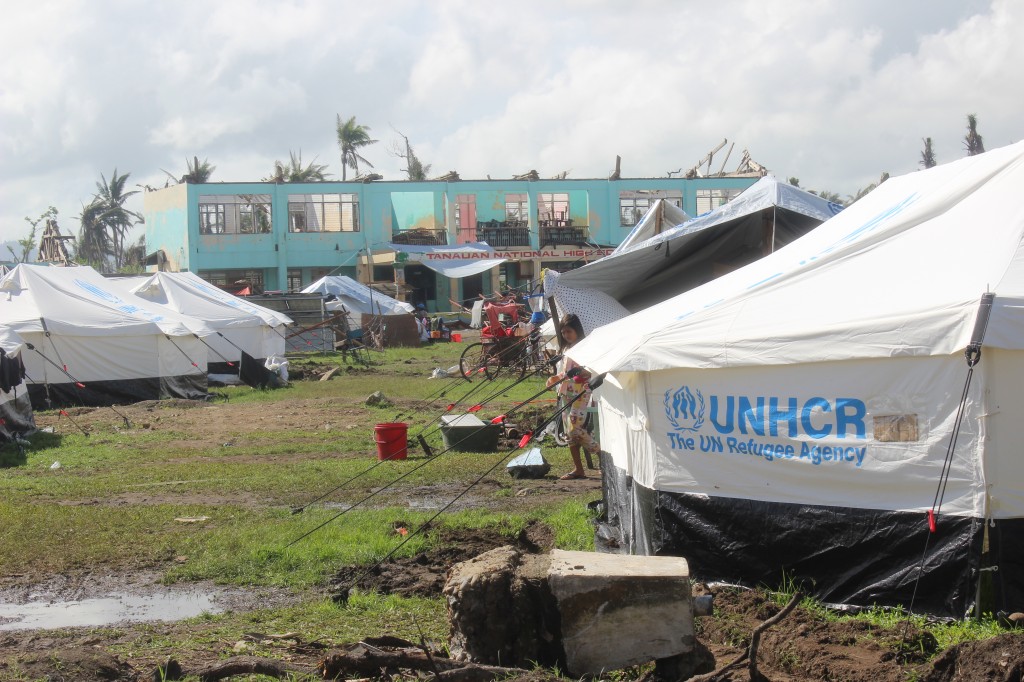 Refugee camps will continue to be a reality for many families for a long time. Even when the cameras stop rolling.

After leaving San Roque, we headed for barangay Mohon, the area where we had tragically lost one sponsored child during the storm. From there we repeated the process of distributing our relief goods at the ruins of Mohon Elementary School. Families queued in the heat as our volunteers double timed to distribute the goods as fast as humanly possible. Signs of gratitude were in abundance, but many residents still felt hopeless and abandoned, commenting in Waray that whenever relief was delivered, there was never enough to go around. The spirit of the children in the area hadn’t been dampened though, perhaps being too innocent to understand the gravity of the situation that their parents have no other option than to face. As we clambered back aboard our vehicles, kids found time to exchange in high-fives with many of the international volunteers whilst their parents beckoned for us to return as soon as possible.

Our final stop was barangay Cangumbang in Palo, Leyte. This was the location that I’d told everyone about, the location where VFV’s Evacuation Center had saved an entire community. Here, the kids were most energetic, spotting our vehicles from a mile off and chasing us all the way into the center of the barangay before immediately herding to Elsa Thomasma, the US Volunteer from Michigan who had orchestrated the construction of the building only a year or so earlier. There we prepared meals and distributed further relief whilst at the same time examining the extent of the damage that had befallen the beloved evacuation center. Beaten, but not defeated, the VFV Community Center in Cangumbang still stands tall and acts as a beacon of hope for the local families. From here, VFV will continue to distribute further support as more volunteers arrive. 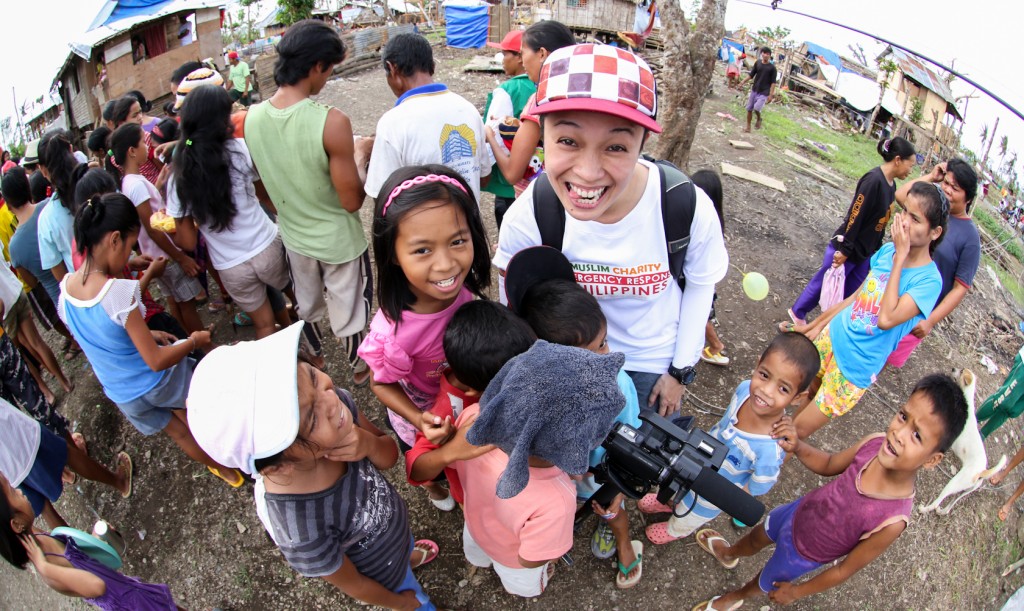 Mauie, our super dedicated videographer catching all the action.

Traveling with VFV for one day reminded me on how well-knitted the organization has become in the local communities. The road ahead will continue to be long and challenging, but given this organizations innate ability to meet the needs of local communities, i’m confident that with enough volunteer and donor support, that it will get lives back on track. I was also honored by the devotion of the VFV staff; despite being victims themselves, they put aside their personal wants and needs in exchange for assisting the communities that looked to them for support and guidance.

After my return to Manila, one of the most common questions I’ve been asked is if whether or not the area is returning to normal. I can say without a shadow of a doubt, irregardless of what media spin there might be at work, that life for many families affected by Typhoon Yolanda will not return to normal for a very long time. Many of the families are indefinitely housed in refugee camps until other arrangements can be made whilst others have not just lost their homes, but also their primary means of livelihood. The road to repair will be long and hard, granted some progress is being made, but these people are far from being “okay”.

Board Trustee, Volunteer for the Visayans