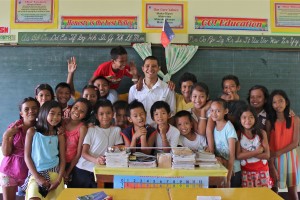 Sir Jonah and his class

Moteachon Elementary School has become one of the most desirable schools in Leyte thanks to a strong relationship with VFV.

The Tanauan school, about 45 minutes from Tacloban, was the recipient of VFV’s Adopt-A-School Project — delivering much-needed school supplies to underfunded rural schools — for five years.

The children at Mahon Elementary also benefit from the presence of VFV volunteer teachers.

“The volunteers help pupils a lot academically — their English is also strengthened as they learn correct pronunciation from listening to them,” said senior teacher Artemia Castillo who has taught at the school for 22 years.

“The volunteers have also donated resources; they donated materials especially after the typhoon.” 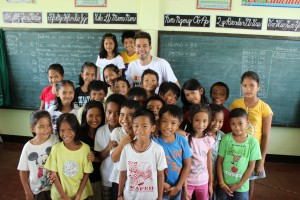 US volunteer Jonah Konop, who is teaching fifth grade at the school, said his time at the blackboard is shaping him as much as his pupils.

“I am learning what it is like to work in a community that is rebuilding after what felt like the apocalypse to them.

“I have a little girl who lost both her parents in the typhoon and yet she still comes to school to learn.”

Norwegian volunteer, Michael Stocker is teaching fourth grade for seven weeks. He too is impressed with his students’ resilience.

“This school was hit pretty hard; the students lost a lot of their friends,” he said. 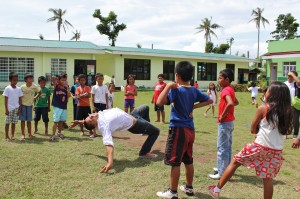 “My class is so polite and friendly and eager to learn — if I had a fourth grade class back in Norway it would be chaotic.”

Despite the heartache Yolanda brought to Mahon Elementary, the school’s reputation continues to grow.

“I asked a little girl, who moved from Manila to Tacloban, why she enrolled at Mahon,” said Jonah.

“She said it is the most put together school in Leyte.”

Would you like spend time helping children in underfunded schools? Click here to learn more about volunteering with VFV!