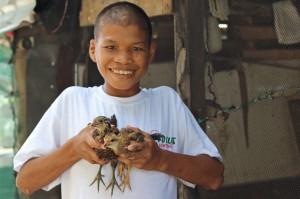 The Tacloban Boy’s Shelter in Tagpuro has a new bedroom thanks to the efforts of VFV volunteers.

“It is so great to have new beds!” said 13-year-old shelter resident, Daryl.

“It was a couple of weeks before anyone could get out to the boys — they were starving and terrified of looters so they sharpened the kitchen knives and slept with them,” she said.

“They have slept on the floor ever since.”

Tahlia, who is dedicating four months to improving the shelter, is determined to raise the living standards for the boys. 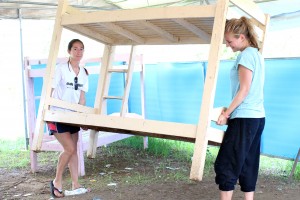 VFV volunteers, April and Tahlia get to work on a second bedroom for the shelter

“My next project will be clearing out the rubbish left over from Yolanda — with the boys running around barefoot, it’s not safe,” said Tahlia.

“If I can tackle the language barrier I’d really like to teach them some basic First Aid.”

The house shelters ten boys between the ages of 12 and 20 who have been rescued from a life on the streets.

The shelter employs a rotating group of guardians that enforce house rules and school attendance.

The boys learn how to cook, clean, keep chickens and are now learning how to grow their own food thanks to a donation of seeds through VFV.

“They will be growing beans, okra, and cabbage which is important because right now their diet is mostly rice,” said US volunteer April Sick.

April dropped in to the shelter to help Tahlia with the bedroom makeover and found herself moved to action by the plight of the street kids.

“I saw all the availability at this shelter and so many street kids in the city and I just felt frustrated to the point where I knew I had to do something about it,” said April. 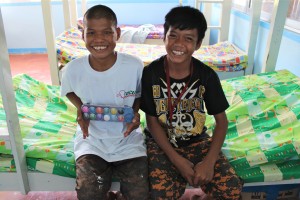 Daryl and Johnly are all smiles in their new bedroom

“The street kids in Tacloban have really touched me; they deserve a safe place to live.”

April shared photographs and the boys’ story with her family and friends back in Florida and raised funds to do further work to the shelter.

“There is plenty of space here but no money to bring in more children — I want that to change,” said April.

Would you like to make a difference in the lives of disadvantaged children? Click here to learn more about volunteering with VFV!