Near the rickety collection of huts that make up the remote village of Tagpuro you wouldn’t expect much, let alone a program as inspiring as the Social Development Center (SDC). 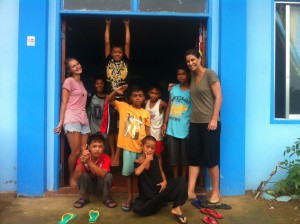 Volunteers Natasha (right) and Tahlia (left) with some of the boys of SDC.

First established in 2003, SDC (better known as sweet dreams) was created to provide street children with shelter and protection. The children are brought to the shelter by NGO’s, social workers, or the children’s parents. Often times it’s due to abandonment, abuse, or domestic issues. Once introduced to the facility children are not forced to stay and may leave if they wish to do so.

Several months ago Tahlia Sharples, a volunteer with Volunteer for Visayans, joined the program. Working tirelessly with the centers local staff she has embarked on a daring mission to improve the condition of the run down and poorly equipped facility. Since Typhoon Yolanda struck in 2013 the facility has been largely neglected due to a lack of proper government funding.

Walking through the facility, Tahlia recollects on the various projects that have already been undertaken.

“Through personal fundraising on indiegogo I was able to get the children some critical medical treatment such as eye treatments and extensive dental surgery. One of the kids had to have 10 dental fillings as they can’t afford basic necessities like tooth paste to brush their teeth.” 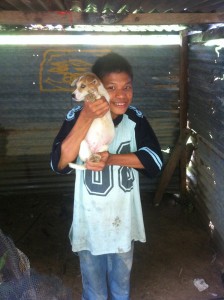 A warm smile from Darrel, one of the boys at SDC.

Going through the center it becomes clear Tahlia and newly inducted volunteer Natasha have a genuine care for the future of the children at the center, going so far as to purchase farm animals to ensure there is a steady flow of income to the center well after they leave.

Whilst Tahlia and Natasha’s work has been remarkable, ongoing programs like this are only possible with your support. If you would like to help with this project by volunteering click here!