Since becoming the first to host volunteers for VFV in January 2004, the Llanto family has experienced the globe from the comfort of their own home. 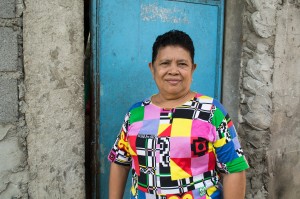 Living in the Bliss community, Nanay Marlyn and her family have welcomed over 100 volunteers from countries such as Canada, the United States, Holland, The Netherlands, and more.

She says one of the best things about being a host mother is “the ability to mingle with other countries, as well as practice our English.” Learning and exercising English is especially beneficial for her 8 grandchildren, some of whom also live with her.

With four children of her own, Nanay Marlyn is no stranger to the duties of being a mother. She provides breakfast and dinner; a task she says can at times be tricky. For breakfast, “a lot of the volunteers demand cornflakes and fresh milk.” As for dinner, Nanay Marlyn cooks traditional Filipino cuisine because she wants volunteers to have a good sense of her culture. She enjoys making lumpia Shanghai, pork adobo, and squash with coconut milk 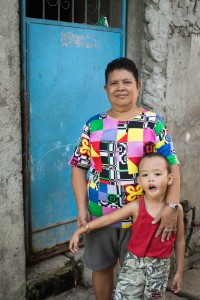 Volunteers have stayed with Nanay Marlyn for various amounts of time, ranging from a few weeks to as long as six months.

“I had a male volunteer who stayed with me for one month some time ago. He was a drunkard, and was constantly irritated by the dogs that hung around outside. They barked non-stop, and one night on his way home he became so angry, he actually hit one of them hard on the belly. I had to yell at him to stop or else the dog would have attacked him!”

This weekend she will welcome three volunteers from Australia who will stay for two weeks. It’s time, she says, to stock up on cornflakes!

Want to experience Filipino culture in depth while helping a community in need? Click here to learn more about opportunities volunteering with VFV!

*written by Courtney Cunningham, media intern from the United States.