Here’s some sort of a profile story of a lovely couple Volunteer for the Visayans has come to work with in recent years, another dynamic duo I can say that the volunteering world has, Les Treacy and Debbie Curtin. I got the chance to sit down with them for an interview where they willingly obliged despite their busy schedule. With their prior permission, I’m sharing with you below a bit of their story. 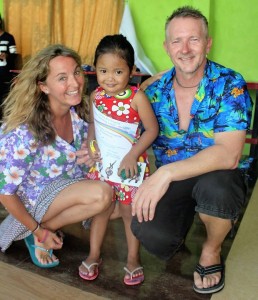 The lovely couple striking a pose with one of the equally lovely kids of the swim school program.

Hailing from Australia, the couple had their first volunteer project with VFV way back in March of 2015 when they signed up for one of VFV’s Construction Projects in New Kawayan, augmenting the manpower needed in erecting the Alternative Learning System (ALS) classroom facility in said village north of Tacloban City. They would later on run swim lessons and nutrition projects with the kids under VFV’s Child Sponsorship Program after seeing the need for volunteers in those areas. Since then, the couple has had frequent return trips to Tacloban cementing their ties with VFV, with the kids, and their new found friends in the city.

They’ve been together for more than 16 years already, obviously the relationship always getting stronger and they can only wish they have started volunteering during the earlier years of their relationship. The two can’t hide the excitement while narrating to me how they first met on a blind date arranged by their friends back at home. Deb would describe Les  as a very caring person and that’s what she likes most about him while at the same time teasing him for always making lengthy talks when answering yes or no questions. Les was however quick to rebut that he’s just being analytical and would not want to leave any grey area in everything they do especially with their projects. Les on the other hand would describe Debbie as loving and sweet also, but a black and white, yes or no type of person who can be strict at times and apparently the opposite of Les’ chatty nature. But I can tell you that as I listen to their stories, one can already tell that they perfectly complement each other’s character.

Both of them have full-time employment back at home, Les working for an international freight company, while Debbie works for a bank and a swim school teacher for kids on weekends. They would use their leave credits travelling across Asian countries for rest and relaxation. It was during one of their RnR trips in Thailand sometime in March of 2014 which started it all for the couple being involved in volunteering. They met this guy whom they recognized coming from their place also, in his early 60s, and who happened to have just finished a volunteer project in Tacloban, constructing houses for the victims of the supertyphoon. The couple recounts hearing him tell his experience back in Tacloban and about the destruction he saw, and how thousands of families were still in dire need of livable houses. I thank that guy not only for doing his own share of kindness, but also for apparently igniting the couple’s passion for volunteering and doing community projects. 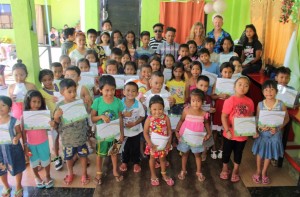 The couple, reunited with the kids of the swim school.

To date, the couple has already successfully organized a good number of swimming lessons for the kids in Tacloban since March of 2015. Teaching kids in Tacloban how to swim has been a personal mission for the couple since day one after they came to know that it was the destructive storm surges which claimed thousands of lives during  Yolanda’s onslaught. The most recent that they had was just concluded last October 25, Les’ birthday, with a pool party highlighting the day, where lots of souvenir items and gifts where handed by the couple to the kids. They have also started a 5-month Nutrition/Feeding Program with the pre-school kids going to the Bliss Day Care Center, a facility also built by VFV thru its generous donors which include the couple themselves. They’ve been supporting also the all-girls football team of Northern Tacloban National High School composed of some of the athletic sponsored kids of VFV under the Dumpsite Project, providing them with team uniforms and football sports materials. Adding to those commendable volunteering ventures, they have also founded their own volunteer organization back in Australia, the United Aid Projects, which formally organizes fundraisers, crowdfunding projects, and manages all the resources they get from their supporters, and personally deliver the aid and community projects to the less-privileged communities around the world. 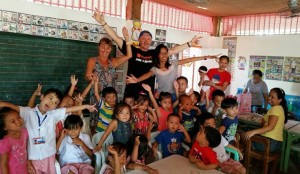 The couple running a nutrition program with the pre-school kids at Bliss Day Care Center.

The couple’s decision to team up with VFV has proven to be very rewarding and successful. They can still vividly recall the very first time they set foot on Bliss, Deb being a bit scared but both of them feeling excited for the projects they had in mind. Les was awed upon seeing VFV’s office situated right at the heart of Bliss, a densely populated community. They were moved when people would walk up to them, not begging for money, but instead saying thank you knowing they were volunteers.

When asked what advice can they give to people thinking about volunteering or working for their cause, here’s what they would tell us. “Give it a go, never give up, and everything will fall into place. Always put  yourselves into the shoes of the people you’re helping, connect with them, have fun and laugh with them, cherish every moment, and everything’s going to be a worthwhile and fun experience. There’s no denying that it may be hard in the earlier stages, like culture shock, language barriers, and living out of your comfort zones, which can be a bit stressful sometimes, but it will always be a rewarding endeavor in the end”. 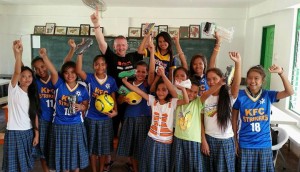 With the Girl’s Football Team

From all of us here in Tacloban, thank you very much Les and Debbbie! Kudos to the both of you for a job well done!