It’ been nearly three months since VFV Community Program Coordinator Wimwim Canayong made her visit to see Lola Cion with the GMA Imbestigador team. Since then, a lot has happened and we’re praying for even more, with a little help from our friends. 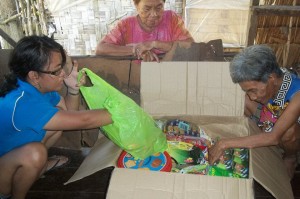 To recap, Lola Cion is an elderly grandmother charged with the sole responsibility of raising her three grandchildren aged 5, 7 and 10 years old. Most of her day is spent

undergoing chores such as collecting firewood or farming root crops in order to make a meagre income to support her family. On a good day, Lola can make a few peso which would allow her to prepare a simple meal, however the family lacks a sufficient income to provide some of the basic needs. What makes Lola’s situation even worse is that she lives on an extremely remote island off the coast of Leyte which is only reachable by pump boat and makes visits by social welfare organizations extremely rare.

Since the show was first aired, VFV have received more well-wishes and pledges from Filipino benefactors who wish to help Lola Cion. In particular, there has been discussion both on VFV’s Twitter account and numerous comments and updates given through its Facebook page.

What makes the case of Lola Cion so different from it’s other projects is that the majority of benefactors for the project have been Filipino. Usually VFV is given a lot of support through its fantastic international child sponsors and donors who are able to provide funds to provide disadvantaged children with the means to go to school, to rehabilitate children from working inside local garbage dumps and to feed malnourished children. However, with the case of Lola Cion – VFV have accumulated a number of varying sized donations from local donors here in the Philippines and also Filipino’s currently working overseas.

Can we find 200 Filipino’s willing to donate a 1000 peso to rebuild Lola Cions house? With your help we can.

With this in mind, VFV have initiated the 1000 Peso Challenge, an initiative with the goal of finding 200 donors in the Philippines to each donate 1,000 peso so that VFV can reach it’s target goal of 200,000 Peso in order to rebuild Lola Cion’s quickly dilapidating home. This is not just a way of changing the life of one family, but a method to highlight and emphasize the solidarity of the Filipino people, to showcase that despite being a nation with numerous economic challenges, that we can unite and band together for a worthy cause.

So where do we start? Well first of all – if you can’t spare then share, like this article and share with as many people as you possibly can, also follow us on Facebook and follow our tweets on Twitter. If you do have the capacity to give something, you can make payment either via internet banking or by going into a Philippine National Bank branch and make a payment:

With the help from their fellow Filipino’s, positive change can happen for Lola Cion and her family. Kaya natin ito pag tayo’y magtutulungan!