January 16, 2015, 3 days before the group of Canadian students from Cegep de Remouski’s return to Canada. 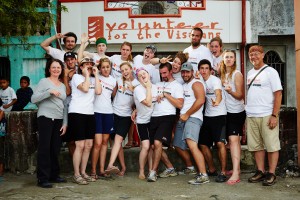 They were presented an activity and games which they were never played and experienced before.

We call it  Laro ng Lahi or the Traditional Filipino Games.

These games are commonly played by children, usually using  native materials or instruments. Due to limited resources of toys of Filipino Children, they usually come up with games without the need of anything but the players themselves.

Years ago, kids used to gather in the streets or in their neighborhood playground to play their favorite Pinoy games.

This has been their regular and popular pastimes, as well as the favorite games of our parents and grandparents until new and modern forms of entertainment (technology like computers, phones) has taken over the interests of children. But a great majority of Filipino children still play this games.

There are about 40 known traditional Filipino games but we just taught them six games.

The group of students were divided into three groups. Sponsored kids were also divided and assigned to the three groups.

First game was sudsud, it has a rectangular pattern with columns and lines that are drawn on the floor. Players have their own small flat stones. All columns are just like levels. First, you will throw the stone to the first column then you move the stone with one foot while the other foot is hanging up.

Second game was called dampa, it is a rubber band game, usually using  bare hands in producing air coming out of the hand to move the rubber bands.

Third game was called kadang , it is composed of two coconut shells attached with string. It is played by using the coconut shells as a slippers while holding the strings. Whichever team finishes first wins.

Fourth game was chinese garter, two people hold both ends of a stretched garter horizontally while the others attempt to cross over it. The goal is to cross without having tripped on the garter. With each round, the garter’s height is made higher than the previous round (the game starts with the garter at ankle-level, followed by knee-level, until the garter is positioned above the head). The higher rounds demand dexterity, and the players generally leap with their feet first in the air, so their feet cross over the garter, and they end up landing on the other side. Also, with the higher levels, doing cartwheels to “cross” the garter is allowed.

Fifth game was Patintero (in English try to cross my line without letting me touch or catch you). There are two teams playing: an attack team and a defence team; with players for each team. To score, attack team players must make “home-runs”. The attack team must try to run along the perpendicular lines from the home-base to the back-end, and return without being tagged by the defence players. 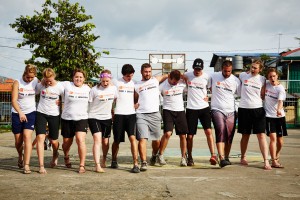 Sixth game was called higot-higot, this game has a string that is tie in each players foot. Basically this game is about teamwork or teambuilding , whoever team reaches the line wins.

After the exciting and spectacular games the group have their first budol-fight. It is a Filipino style of eating with no plates, spoon and forks but only with bare hands. All the foods are served in a banana leaf. These are all native delicacies

The group was so tired after playing but were refreshed afterward. Thus, the real objective of this activity is to show them the Filipino games, the culture and the food.