The overview of this project , is seen as a climate change mitigation strategy that seeks to enhance the country’s forest stock to absorb carbon dioxide, which is largely blamed for global warming.

Its history, goes back after Typhoon “Yolanda”(Haiyan), considered one of the most powerful typhoons to have made landfall in recorded history,devastated Tacloban and the nearby towns of Palo,Tanauan,Tolosa and Dulag due to strong winds and storm surges.

The coastal zones in these municipalities are densely populated and with high density built up areas and dwelling of impoverished and marginalized sector. Rapid Geo-reference assessment conducted by the Forest Management Bureau and B+WISER in city of Tacloban and Palo, Leyte revealed that 80% of the damage and casualties occurred in coastal areas. 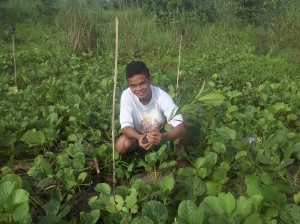 Absence of effective natural greenbelt barriers makes the coastal zones vulnerable to devastations brought about by storm surges. Trees along the beach areas serve as buffer and protection against strong winds and storm surges.

Beach tree species act as carbon sinks and reduce organic pollution in shoreline areas by trapping, filtration, or absorption. They also serve as home to migratory birds and other wildlife and provide a     valuable source of food for animals.

It is in this context that the Leyte gulf mangrove and beach forests rehabilitation project was implemented.

The beach area in Brgy. Baras, Palo Leyte is assigned to Volunteer for the Visayans as its Adopted Beach Forest. It will be reforested with Talisay and Bani species to replace the trees destroyed during Typhoon Haiyan.

This project is coordinated with the Department of Environmental and Natural Resources VIII-CENRO Palo, Leyte. This initiative aims to conserve our natural environment. The forest will serve as physical barrier against waves, storm surges, tidal currents, and typhoons to protect coastal areas and communities.

Last November 15, 2014, Volunteer for the Visayans, with its staff, some college scholars, and members of the boys and girls club participated in its first Tree-Planting activity in Brgy. Baras, Palo, Leyte. A total of 500 seedlings were planted. VFV is tasked to plant 4000 seedlings in this specific site. So, there are 3500 more seedlings to be planted in the coming month!

To learn more about volunteering please click the following: https://visayans.org/volunteer